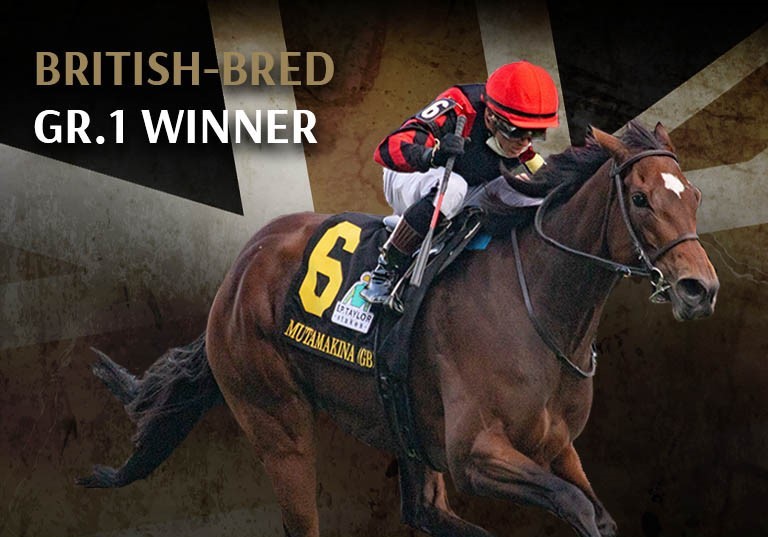 MUTAMAKINA (GB) was the brave winner of the Grade 1 E P Taylor Stakes at Woodbine Racecourse on Sunday for owner Al Shira'aa Farms, holding stablemate LA DRAGONTEA (GB) at bay to snatch a maiden top-flight victory by a neck at the wire.

The five-year-old mare was bred by Guy and Karen Gredley of Widgham Stud just outside Newmarket. The result continued the dominance of European-bred horses in top-level turf contests on the other side of the Atlantic, with German-bred KALIFORNIA QUEEN chasing the British-bred pair home in third.

It also represents another feather in the cap of Mutamakina’s sire, NATHANIEL, who commanded a fee of £15,000 at Newsells Park Stud in 2021. Mutamakina joins Enable, Channel, God Given and Lady Bowthorpe – the latter of whom placed 3rd in the Group 1 Queen Elizabeth II Stakes on Saturday on her final racecourse appearance – as a Group 1 winning daughter of Nathaniel.

In total, Nathaniel has 50 Stakes performers to his name. In recent weeks, he has also carved out a name for himself as an exciting broodmare sire prospect: he can already count a Group 1 winner among his small handful of representatives in the shape of Prix Marcel Boussac winner, ZELLIE.

The win is also an encouraging one for Peter and Frances Stanley, whose New England Stud sold Mutamakina for 100,000 guineas to American agent Shawn Dugan at Tattersalls October Yearling Sale Book 2 in 2017, and subsequently bought the mare’s dam, JOSHUA’S PRINCESS (GB), having liked Mutamakina so much.

While none of Joshua’s Princess’ other progeny thus far have scaled the same heights as Mutamakina, all six foals to have raced are winners. She has a 2021 colt foal by CAMELOT (GB) at foot and is back in foal to Nathaniel.