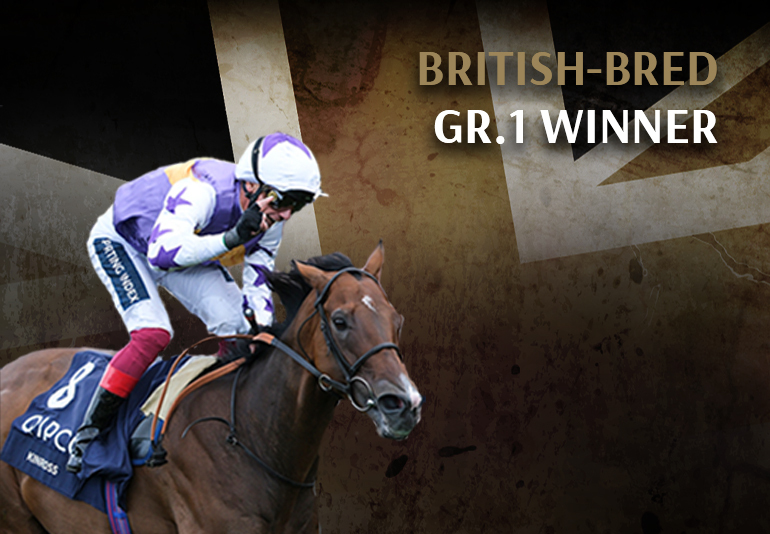 Two weeks after proving himself the ‘Seven Furlong King’ with a sixth triumph at that trip in the Group 1 Prix de la Foret, KINROSS (GB) showed that he can do it as six furlongs too with a dominant display in the Group 1 QIPCO British Champions Sprint Stakes at Ascot Racecourse on Saturday.

Travelling smoothly throughout the £500,000 contest, the Ralph Beckett-trained gelding stormed clear approaching the final furlong and had two and a quarter lengths to spare over the rank outsider RUN TO FREEDOM (GB) passing the winning post.

Kinross was winning his fourth consecutive race and was carrying on the recent golden spell for his stallion, KINGMAN (GB), just eight days after COMMISSIONING (GB) had given him another Group 1 success in the Fillies’ Mile. Kingman is one of an outstanding collection of sires, headed by the sensational FRANKEL (GB), standing at Banstead Manor Stud near Newmarket.

The result also continued an amazing recent run for his owner, Mark Chan, who teamed up with Beckett to land last month’s Group 1 Cheveley Park Stakes with LEZOO (GB).

Kinross was bred at Lawn Stud in Northamptonshire by Julian Richmond-Watson, who does exceptionally well with his half a dozen broodmares and less than a year ago was celebrating a home-bred top level success when SCOPE (GB) landed the Prix Royal-Oak.

Now the winner of eight of his 21 career starts and over £1 million in prize money, Kinross is likely to get the chance to further prove his versatility and toughness in America in three weeks time as Beckett revealed afterwards that he is set to have one more start this season, in the Breeders’ Cup Mile at Keeneland in Kentucky.