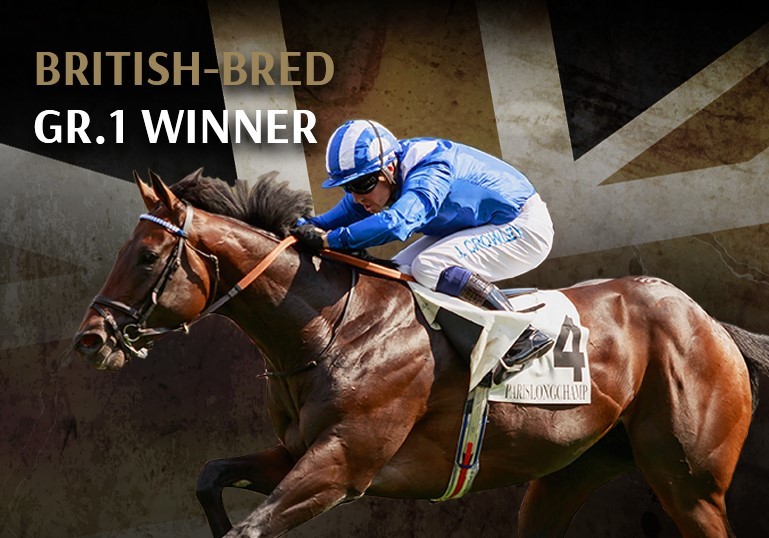 BAAEED (GB) appeared a horse of limitless potential from the moment he took his first steps on a racecourse in June, and he fulfilled that promise with a facile success in the Group 1 Prix du Moulin at Paris Longchamp on Sunday afternoon.

The unbeaten three-year-old SEA THE STARS colt trained by William Haggas carried not only Jim Crowley but the burden of expectation his thrilling career had created, into the one mile contest and he proved more than capable of meeting the challenge. German 2,000 Guineas winner NOVEMBA opened up a six length advantage when she finally got to the front after a messy break. Crowley positioned the Shadwell Estate Company owned and bred colt in the middle of the six runners, just ahead of fellow British-bred challenger SKY LANTERN (FRANKEL {GB}).

When Crowley asked Baaeed to go and win the race inside the final two furlongs, the response was instant and he quickly assumed command without having to fully exert himself. The margin of victory was a length and a quarter over the Grade 1 Breeders’ Cup Mile winner ORDER OF AUSTRALIA (AUSTRALIA {GB}), with the dual Group 1 winner VICTOR LUDORUM (GB) a short neck further back in third. Group 1 winner Snow Lantern was fourth for Richard Hannon and her owner-breeder Rockcliffe Stud.

Baaeed only made his debut at Leicester in early June and in the three months since then he has progressed rapidly and with aplomb, signalling his exciting talent with an impressive Listed victory at Newmarket’s July meeting before his scintillating success in the Group 3 Thoroughbred Stakes at Goodwood last time out.

He is a fifth generation home-bred for the late Sheikh Hamdan Al Maktoum’s Shadwell Estate, which is now overseen by his daughter Sheikha Hissa, and Baaeed traces his lineage back to Sheikh Hamdam’s blue hen HEIGHT OF FASHION, who was bred by Her Majesty The Queen, in whose colours she won the Group 1 Fillies’ Mile.

Baaeed’s dam AGHAREED won the Listed Prix de Liancourt, also at Longchamp, and is by KINGMAMBO and out of the Grade 1 Flower Bowl Invitational Stakes winner LAHUDOOD (GB). Baaeed’s year older full-brother HUKUM is a multiple Group 3 winner during the last two seasons.

Aghareed divides her time between Shadwell’s English farms and its Irish base, Derrinstown Stud, where she currently resides with her colt foal by NIGHT OF THUNDER. She also has a yearling colt by Newsells Park Stud’s leading sire NATHANIEL and a two-year-old INTELLO filly named ZAGHAREED (GB).

"We are delighted to see him win his Group 1 today and maintain his unbeaten record. It's fabulous for Sheikha Hissa and the entire Shadwell team.

"That was only his fifth career start so hopefully he'll just keep improving and there's plenty more to come. If he maintains this trajectory, he could become the best miler son of Sea The Stars to boot, which would hopefully add value to his future stud career. Like his father, he's blessed with a wonderful attitude, a great mind, he's incredibly laid back with a wonderful temperament, which is an added bonus.

"He's a full-brother to Hukum. Hukum looks a stayer, Baaeed's not a stayer, he's blessed with great natural speed. And I remember Angus saying looks-wise they're completely different. Baaeed's a lot closer to the ground, he's blessed with a fabulous hindquarter, great power, and that's obviously where he gets his speed from.

"We've got lots to look forward to with Aghareed, she has a Nathaniel yearling colt on the ground and a colt foal by Night Of Thunder. Unfortunately she was barren this year, but we can kick on nice and early with her next year.

"I think what makes Baaeed's success today all the more special is the fact that he descends from Sheikh Hamdan's blue hen Height Of Fashion. It really has brought the story full circle. Height Of Fashion put Shadwell's breeding operation on the map with the likes of Nashwan, Unfawain and Nayef, so it's just fantastic for everyone involved across the whole operation."