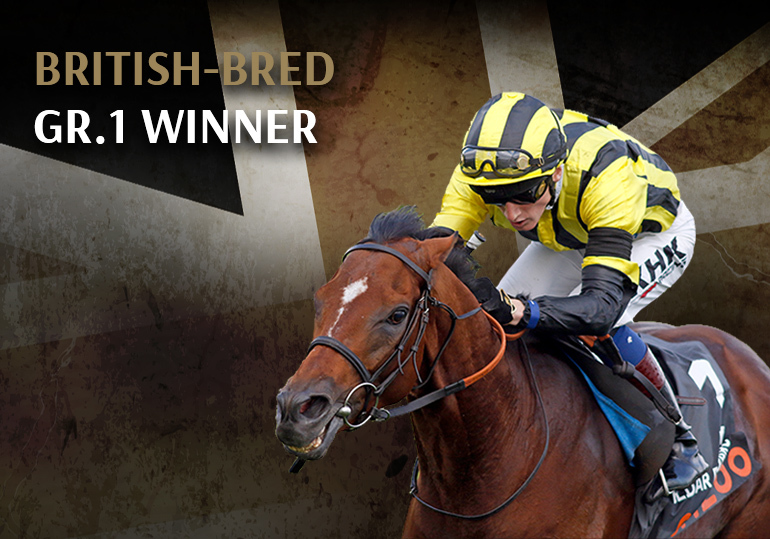 The victory of ELDAR ELDAROV (GB) in Sunday’s Group 1 Cazoo St Leger at Doncaster Racecourse fulfilled a lifelong ambition for his breeder, Kirsten Rausing, to be responsible for the winner of a British Classic.

Ridden by David Egan for Newmarket trainer Roger Varian and sporting the black and yellow striped silks of Bahraini owners KHK Racing, Eldar Eldarov proved much the strongest in the closing stages of this extended mile and three quarters stamina test.

He passed the winning post two lengths clear of another British-bred, HASKOY (GB), with the favourite, NEW LONDON, a further neck adrift in third. Haskoy was later disqualified and placed fourth for causing interference at the two-furlong marker, with New London being awarded second place and GIAVELLOTTO third.

This was Eldar Eldarov’s second big race triumph of the season. He also prevailed at Royal Ascot in June, narrowly winning the Group 2 Queen’s Vase.

Eldar Eldarov is by the outstanding stallion DUBAWI, who is based at Dalham Hall Stud in Newmarket. He is the third foal out of the three-time Listed-winning mare ALL AT SEA (GB), who is resident at another top Newmarket nursery, Lanwades Stud, which is owned and managed by Miss Rausing.

He was sold as a yearling at Goffs Orby Sale at Doncaster in September 2020, where he was purchased for £110,000 by Mags O’Toole on behalf of the former top class jump jockey, Norman Williamson. He was then prepared for the Arqana Breeze-Up Sale, which also took place at Doncaster eight months later, this time being knocked down to his current owners for £480,000.

Lanwades has been enjoying a golden spell of late. Domestically, Rausing celebrated a first British Group 1 victory for five-time top-level scorer ALPINISTA (GB), who runs in her own famous green and white colours and is out of a half-sister to All At Sea, in the Yorkshire Oaks. Meanwhile in Australia, ZAAKI (GB) returned to winning ways in the Group 2 Tramway Stakes last Saturday 3rd September.

“I am thrilled and delighted. Eldar Eldarov is from such a wonderful family, one which I first got involved with when I was a schoolgirl back in the 1960s and one which just keeps on giving.

“It has always been my ambition to win an English Classic and we have gone agonisingly close a couple of times in the Epsom Derby in the past, first with DRAGON DANCER (GB), who was beaten a short head by SIR PERCY (GB), who, ironically, we now have standing here at Lanwades, and then with FAME AND GLORY (GB), who was second to SEA THE STARS before going on to win the Irish Derby.

“Now that I have finally won one, I would like to look further afield with his first cousin, Alpinista, in the Arc. So far so good with her since the Yorkshire Oaks, everything seems to be going to plan.

“And then there is Zaaki, who is being aimed for the Cox Plate and made a winning comeback the other day.

“Eldar Eldarov was always a particularly nice colt but if I wanted to fault him, he was the spitting image of his dam and was maybe a bit too elegant. He went to the sales during the pandemic, there was hardly a soul to be seen and fetched a relatively modest sum. In a normal year, I am sure that he would have made much more.

“All At Sea is here at Lanwades and is in foal to STUDY OF MAN. She has a most lovely yearling filly by Study of Man who I am going to keep and a colt foal by LOPE DE VEGA who is going to the December foal sales.”