DESERT CROWN SO IMPRESSIVE AS BRITISH-BREDS DOMINATE THE CAZOO DERBY 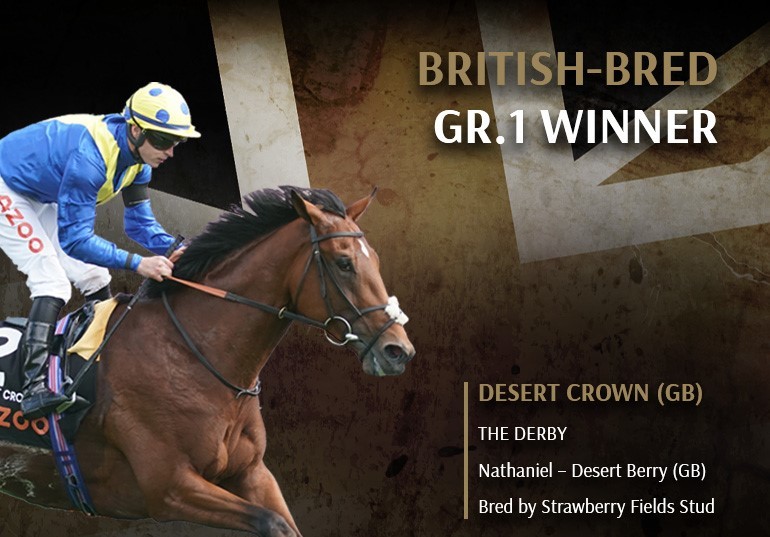 DESERT CROWN (GB) burst on to the global racing scene like a comet when maintaining his unbeaten record with a commanding two and a half length victory, leading home a 1-2-3 for British-breds, in the £1.604 million Group 1 Cazoo Derby (In Memory Of Lester Piggott) at Epsom Downs Racecourse on Saturday.

Now a winner of all three lifetimes starts, Desert Crown is a son of the Newsells Park Stud stallion, NATHANIEL, sire of the dual Arc and three-time Oaks heroine, ENABLE (GB), who currently stands at a covering fee of just £15,000. He was purchased for 280,000 guineas at the Tattersalls October Yearling Sale Book 2 by Blandford Bloodstock on behalf of owner Saeed Suhail.

The victory was the sixth in Britain’s premier race for the ten-time British Champion Trainer, Newmarket-based Sir Michael Stoute, who first tasted Derby victory with SHERGAR (GB) in 1981 but had not enjoyed further success in this colts Classic since WORKFORCE (GB) won it in 2010.

By contrast, it was just a second ever Derby ride and first triumph for the 35-year-old Somerset-born jockey, Richard Kingscote, who always had his mount in the first half dozen. Having hit the front approaching the two furlong marker, Desert Crown strode clear to score in impressive fashion.

He was chased home by the 150-1 outsider, HOO YAL MAL (GB), who is from the second crop of the Dalham Hall Stud stallion, TERRITORIES, while WESTOVER (GB), who had to be taken to the outside having been denied a clear run inside the final quarter mile and is by Banstead Manor Stud’s FRANKEL (GB), finished strongly to get within a head of second place, the front three drawing five and a half lengths clear of the rest of the field.

Desert Crown has yet to be seriously challenged in any of his three racecourse appearances, so further improvement is highly likely. He raced just once as a two-year-old, notching a five and a half length success in a maiden race at Nottingham last November, and Stoute was adamant that he was a long way short of full race fitness when he pulled off a three and a quarter length triumph on his 2022 reappearance, in the Group 2 Al Basti Equiworld Dante Stakes at York last month.

His dam, DESERT BERRY (GB), is from the family of the Group 1 winners BYWORD (GB) and PROVISO (GB). She currently has a full brother foal at foot and has recently tested in foal to Nathaniel for a third time.

All four of Desert Crown’s older siblings are winners, including FLYING THUNDER (GB), who is a Group 3 winner in Hong Kong.

His Derby victory was a fairytale success for his breeder, 65-year-old Gary Robinson, who has only been involved in breeding thoroughbreds for the last 15 years of so. He is the owner of both the Strawberry Fields Stud at Fulbourn, near Cambridge, and Brickfield Stud, some ten miles away in Exning, near Newmarket.

Robinson, who lives in Exning but was brought up in Whittlesey, near Cambridge, is an engineer by trade who started out as an apprentice with Hotpoint and has worked his way up the profession to become owner and managing director of Robinson Worldwide Services, manufacturers of specialist breeze block building bricks that are both ballistic and bomb proof.

Speaking from the White Swan Pub in Exning, where celebrations were about to start, Robinson said: “I have studied thoroughbred bloodlines all my life and have now got so many books on the subject, about 700 in all, that I’ve had to move them out of the house.”

“I raced Desert Berry in partnership with a great friend of mine, Basil White, who has now sadly passed away, and she won a maiden at Lingfield when she was trained by Chris Wall. But she was very lucky to have managed that success as, just a couple of months before, she got loose and galloped through the centre of Newmarket. By the time that she was caught she was covered in cuts and bruises having crashed through the front window of a Turkish restaurant.”

“I have some 14 mares at the moment, and my youngstock include both a yearling half-brother to Desert Crown by AL KAZEEM (GB) and the first progeny of one of Desert Berry’s earlier foals, ROSE BERRY (GB), who is a yearling colt by EXPERT EYE (GB). They will both be going to the sales in the autumn.”

“Once I have had a drink here with my friends, I will be going home to have a celebratory trifle with my daughter and then it’s another big day tomorrow as I am helping organise Exning’s Village Fete, which is part of The Queen’s Platinum Jubilee celebrations.”

Robinson joked: “I’m not sure where I will go with my breeding now, I might pack it in, I don’t think there are any races bigger than the Derby left to win!”