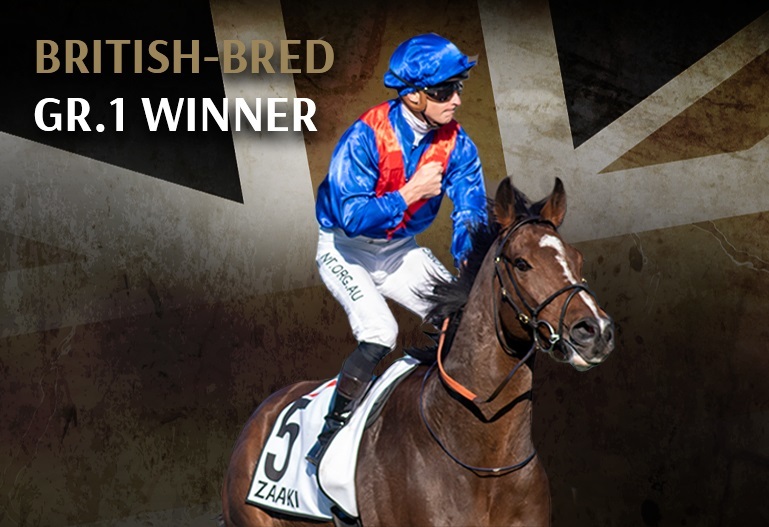 ZAAKI (GB) became the impressive winner of the 2021 Group 1 Doomben Cup at Doomben Racecourse on Saturday, providing Miss Kirsten Rausing and her Lanwades Stud with yet another Australian victory, this time at the highest level.

Zaaki is the second highest earning progeny of the late Lanwades sire LEROISDESANIMAUX after Grade 1 Kentucky Derby and Group 1 Dubai World Cup winner ANIMAL KINGDOM, and one of six winners out of the dual French victor KESARA (GB), from the family of three-time Group 1 champion RIVERQUEEN. The six-year-old is one of four Lanwades-produced horses that have won out in Australia, including Stakes winner LE DON DE VIE (GB), and LORD BELVEDERE (GB).

Previously trained by Sir Michael Stoute for owner Ahmad Alotaibi, who purchased the horse at the Tattersalls Book 2 Yearling Sale in 2016 for 40,000gns, Zaaki is now based at Annabel Neasham’s Sydney stable, having been bought by Blandford Bloodstock on behalf of the British-born trainer at last year’s renewal of the Tattersalls Autumn HIT Sale, for 150,000gns.

The feat represents a first top-flight victory for the horse, a second for the trainer, and an 11th Hollindale-Doomben Cup double, following Zaaki’s Group 2 win at Gold Coast Racecourse on his previous appearance. The gelding’s best results for Stoute include winning the Group 3 Diomed Stakes at Epsom Downs Racecourse in June of 2019, and the Group 3 Stensall Stakes at York Racecourse that same summer.

“We are obviously thrilled, delighted, and grateful to Annabel Neasham who has done so well with the horse.

“After his previous good Group 2 win in Australia, he was always going to be fancied for this. Annabel is doing incredibly well this early in her training career.”

“He [Zaaki] really was an outstanding yearling. I remember him very well. He was beautifully well-balanced; one couldn’t really fault him conformationally.

“Kasara, herself, won two races and should have won a third. She has done very well for us breeding six winners. She has a now yearling filly by BOBBY’S KITTEN and is in foal to STUDY OF MAN. I also keep three of her daughters as broodmares, so the family is well represented at Lanwades.

“He (Leroidesanimaux) was a marvellous horse and one that I was very sad to lose. He had already produced a Kentucky Derby winner in Animal Kingdom. He, himself, was a BLUSHING GROOM sire line that works well with daughters of SADLER’S WELLS, so it was really, as they say, a no-brainer.”

“I do have very few Lanwades-bred horses in Australia. They’ve all obviously been sold from me as yearlings at Tattersalls. Those [Zaaki, Le Don De Vie, Lord Belvedere, WYCLIF {GB} and SIDEREAL {GB}] are the only horses that we bred that are out in Australia and they have all won, except Sedereal who has yet to run.

“Two of them have won black-type and two are just knocking at the door for black-type, so I would have thought we would have quite a good record relative to numbers.”