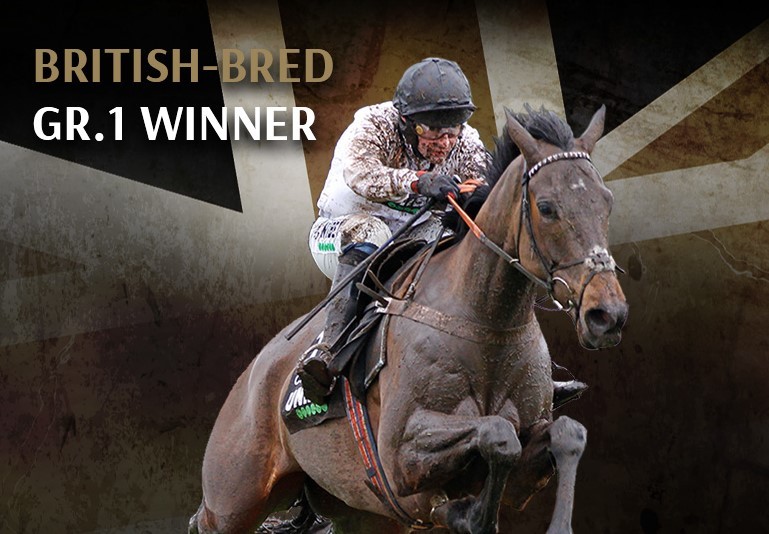 CONSTITUTION HILL (GB) confirmed himself as the new star of British National Hunt breeding on Saturday afternoon at Sandown Park Racecourse, defying the testing conditions to power clear by an impressive 12 lengths in the Grade 1 Tolworth Novices' Hurdle.

This was only the second start of Constitution Hill’s career under rules. A 14-length success over course and distance on debut last month indicated that owner Michael Buckley could have something special on his hands, and Saturday’s victory has only elevated the Nicky Henderson-trained gelding’s reputation further.

The five-year-old, a son of BLUE BRESIL who was standing his first season at Yorton Farm Stud at the time of conception, was purchased for Buckley by Seven Barrows at the Goffs UK Spring HIT/P2P Sale last year. He cost £120,000. Prior to that, he was sold as a foal for €16,500 by Throckmorton Court Stud on behalf of breeder Sally Noott.

Noott, who currently has a small band of four broodmares at her home in Belbroughton, Worcestershire, spoke with GBRI after the race on Saturday.

“I’m still flying, it’s fantastic,” she said. “It makes it all worthwhile when something like this happens. I know it’s not my horse anymore, but I feel like it is.”

On the family and Constitution Hill’s relaxed temperament, Noott continued:

“He was my first foal out of QUEEN OF THE STAGE, and then I’ve got a FLEMENSFIRTH that’s due to race next year. They are all laid-back, they’re all the same. His mother’s quite quirky really, she frets a bit more, but everything she’s produced seems so laid-back. I have a filly to sell, she’s going to Doncaster. She’s just like, ‘I’ve really got to go out now, it’s raining?’, she’s just like that.

“I have them here, then they go to Simon [Balding] at Throckmorton when they’re born, and he takes them to the sales for me to sell at six months.

“It’s quite funny all this has happened, because I’m downsizing to three mares and I did think about selling Queen Of The Stage, and it was Simon who said ‘you’ve done all the hard work, it’s too early’. Only a couple of months ago we had this conversation, and obviously since then all this has happened, so obviously it was a very good move not to do anything.

Constitution Hill is now favourite for the Grade 1 Supreme Novices’ Hurdle at the Cheltenham Festival in March after his Tolworth performance saw him leapfrog record-breaking Goffs UK Yorton Sale gradate JONBON in the market.