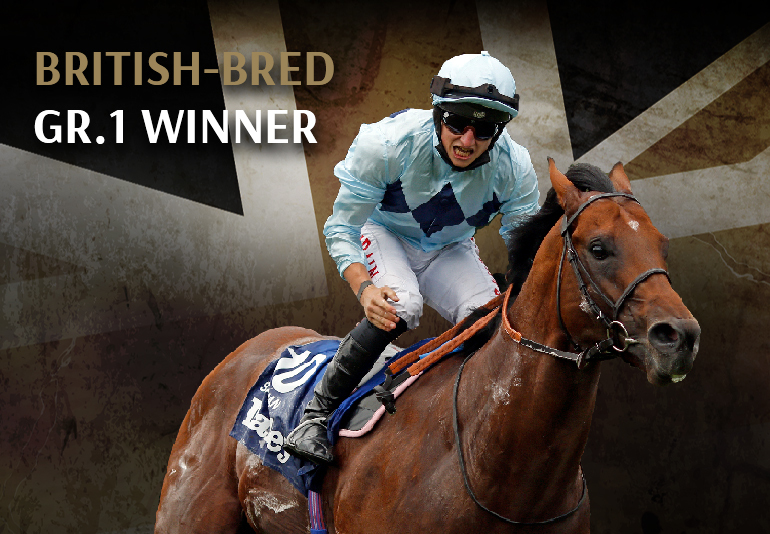 STARMAN (GB) shone brightest of all in a hotly contested renewal of the Group 1 Darley July Cup at Newmarket on Saturday, in a one-two-three for British breeders.

Starting what was the sixth race of his career, the four‐year‐old son of DUTCH ART (GB) finished a length and three quarters clear of Whitsbury Manor Stud-bred DRAGON SYMBOL (GB) (CABLE BAY {GB}), who was second in the Group 1 Commonwealth Cup at Royal Ascot. The Group 1 King’s Stand Stakes winner, OXTED (GB) (MAYSON {GB}), bred by Homecroft Wealth Racing and aiming for a second consecutive July Cup, was third.

Just once has Starman failed to return to the winners’ enclosure after a race and this July Cup triumph represented his second Group success of the year following his victory in the Group 2 Duke Of York Stakes in May.

Starman is one of four Group 1 winners, and the second July Cup winner, sired by Cheveley Park Stud’s Dutch Art who, himself, won the Group 1 Middle Park Stakes and Group 1 Prix Morny during a top‐class racing career.

Starman is the second foal out of NORTHERN STAR by MONTJEU, who breeder David Ward bought as a yearling with the assistance of Ed Sackville of Sackville-Donald. Her first foal was the five‐year‐old SUNDAY STAR (GB), also trained by Ed Walker for Ward. A winner of two races, Sunday Star was also placed at Group 3 and Listed level during a 17‐race career. She will visit FRANKEL (GB) next spring when she will begin her broodmare career, after surgery for an ovarian cyst prevented her from being covered by the champion in 2020.

“We originally went to the yearling sales with the intention of buying a filly who could go on and become a broodmare hopefully and Northern Star has more than accomplished that. She was a decent horse herself, she ran in the Lingfield Oaks Trial, and when she was retired to stud we first chose Kodiac for her and then Dutch Art. With a young mare I always like to use a proven stallion to get her going and Dutch Art fit that role, also we wanted to inject some speed into her pedigree and he has certainly done that.”

Sackville was especially pleased for the Ward family, who board their now handful of mares, including Starman’s half‐sisters, at the Player family’s Whatton Manor Stud:

“I am incredibly lucky to work for wonderful people and you could not meet nicer, more supportive people than Dave and Sue. They have embraced everything, including breeding and we are all praying that Lodestar has a Dutch Art filly next spring, to carry on the line.

“It has been a great July meeting for owner‐breeders with the Keswicks of Rockcliffe Stud winning the Group 1 Falmouth Stakes on Friday with SNOW LANTERN (GB) and now Starman’s July Cup victory. You don’t see that happen very often so it is fantastic.”