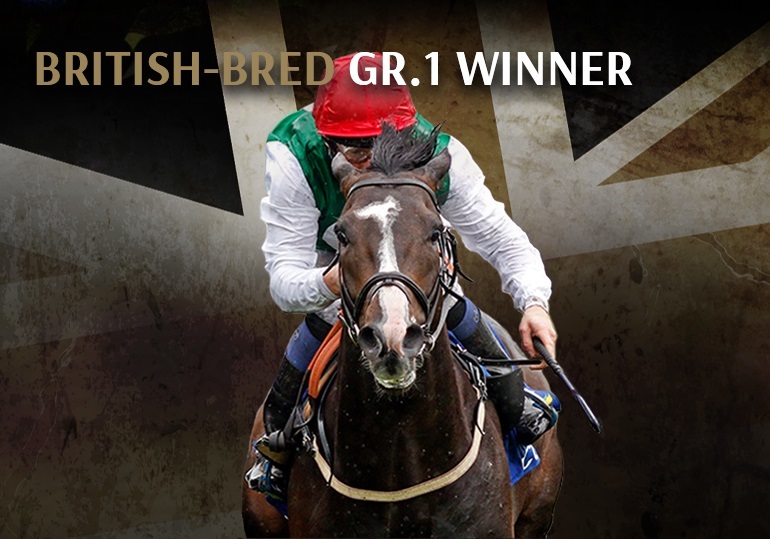 A tenacious victory for PYLEDRIVER (GB) in the Group 1 Coronation Cup at Epsom Downs Racecourse is certain to feature in any end of season highlights compilation; a fairytale story of the unsold foal who has gone on to scale racing’s highest peaks.

The four-year-old son of the much-missed Tweenhills’ sire HARBOUR WATCH contended with a pre-race deluge that dramatically changed the going, the infamous Epsom camber and the sustained challenge of Al AASY on his way to Group 1 glory for Martin Dwyer and the training partnership of William Muir and Chris Grassick.

It was a first Group 1 success for the trainers and for Pyledriver’s proud owners and breeders – Welsh brothers Guy and Huw Leach and their friend Roger Devlin – who initially bought Pyledriver’s dam La Pyle to go hurdling. Her lack of jumping acumen has proven no hindrance to her success as a broodmare; a career change encouraged by the late Kevin Mercer of Usk Valley Stud, who thought the daughter of LE HAVRE had a future in the breeding paddocks.

Mercer’s judgment has been quickly vindicated as La Pyle’s first mating was with Harbour Watch and resulted in Pyledriver, who was bought back by his breeders at the Tattersalls December Foal Sale in 2017 for 10,000gns. Sent into training with William Muir, Pyledriver won on his debut at two over seven furlongs and was also successful in the Listed Ascendant Stakes.

He bloomed at three, winning the Group 2 King Edward VII Stakes at Royal Ascot and York’s Group 2 Great Voltigeur Stakes before an excellent third in the St Leger at Doncaster, just over a length behind GALILEO CHROME and BERKSHIRE ROCCO.

Pyledriver was joined at Muir and Grassick’s Linkslade Stables near Lambourn by his three-year-old half-sister COUNTRY PYLE (GB), a daughter of Derby winner NEW APPROACH. He has a two-year-old half-brother by OASIS DREAM (GB) who attracted considerably more attention and bids than Pyledriver did in the Tattersalls’ sales ring last autumn but 120,000gns was not enough to part him from the Leach brothers and Devlin.

La Pyle, who is a full-sister to Group 3 winner NORMANDEL and a half-sister to French Group 1 winner MONT ORMEL by AIR CHIEF MARSHAL, has a yearling half-sister to Pyledriver by the outstanding FRANKEL (GB). She was covered by Frankel’s Juddmonte Farms’ stud mate and leading young sire KINGMAN (GB) in 2020.