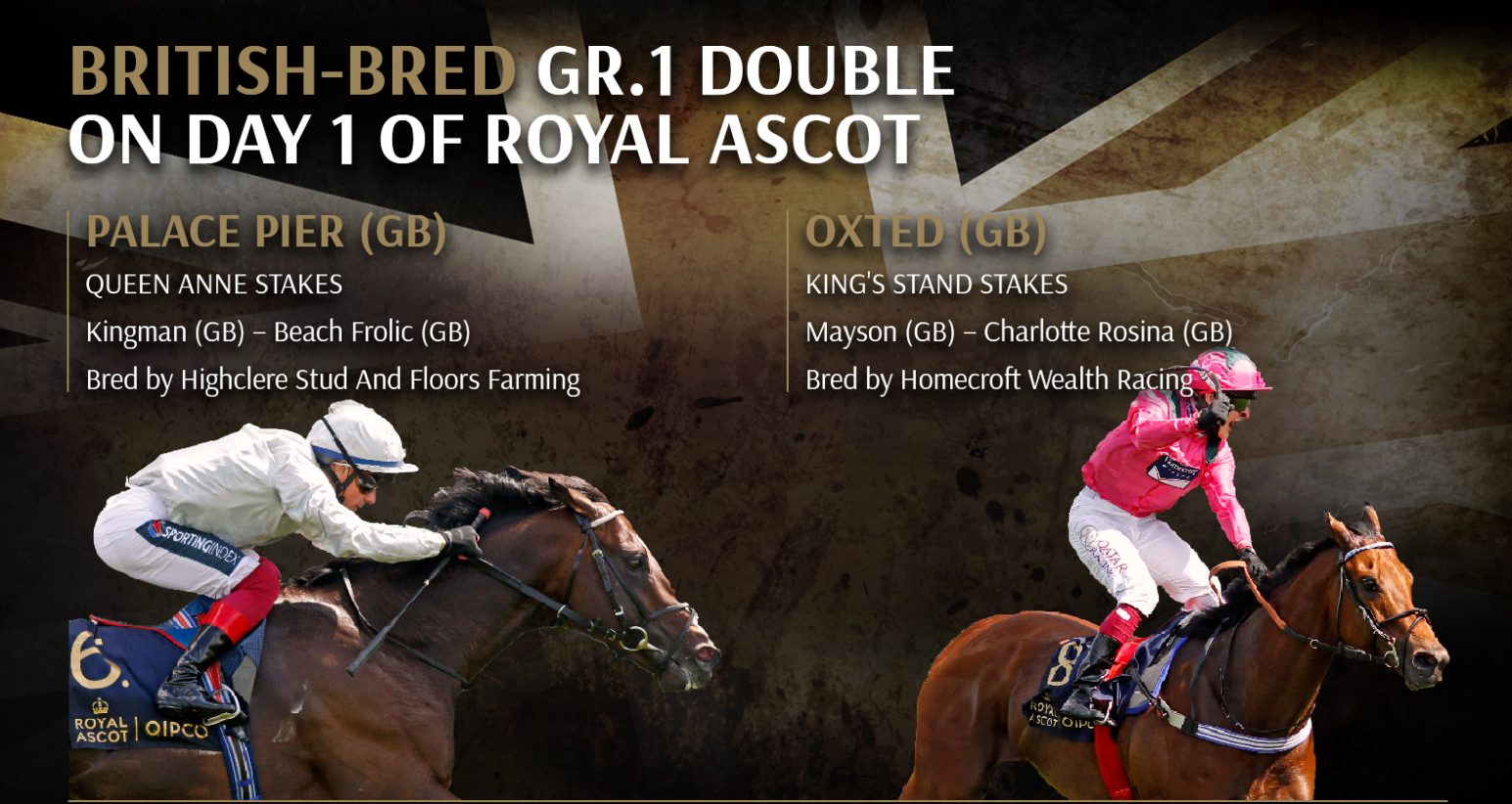 PALACE PIER (GB) gave British breeders a successful start to the 2021 Royal Meeting at Ascot Racecourse on Tuesday afternoon when recording his second victory at the fixture in as many years for breeders Highclere Stud and Floors Farming in the Group 1 Queen Anne Stakes. Shortly after, Homecroft Wealth Racing’s homebred OXTED (GB) landed the Group 1 King’s Stand Stakes, to secure a top-flight double on the first day of Royal Ascot for breeding operations and stallions based in Britain.

The Sheikh Hamdan bin Mohammed Al Maktoum-owned Palace Pier, the highest-rated son of Juddmonte stallion KINGMAN (GB), who stands again for a fee of £150,000 this season, was bred out of BEACH FROLIC (GB), a mare previously owned by Highclere Stud and the late Guy Innes-Ker, 10th Duke of Roxburghe, before selling to M V Magnier last December at the Tattersalls Mares Sale for 2,200,000 guineas.

The feat comes 12 months after the four-year-old landed the Group 1 St James’ Palace Stakes for the partnership of John Gosden – this year training with son Thady – and Frankie Dettori, and exactly one month on since claiming the Group 1 Lockinge Stakes at Newbury Racecourse last time out. The 600,000 guineas Tattersalls Book 1 2018 graduate has now won all but one of his nine starts, four of which have been at the highest grade.

Oxted, who, like Palace Pier, boasts the accolade of the highest-rated progeny by his sire, Cheveley Park Stud’s MAYSON (GB), was bred by former Racehorse Owners Association Vice President Tony Hirschfield and Stephen Piper under the Homecroft banner. The five-year-old is out of CHARLOTTE ROSINA (GB), who was based at Hirschfield’s Cheval Court Stud before selling to Tom Malone for £45,000 at the 2019 Tattersalls Ascot November Sale.

Owned by his breeders and David Fish, and trained by Roger Teal, Oxted was today reunited with jockey Cieren Fallon, under whom he was triumphant in last summer’s Group 1 July Cup at Newmarket.

“We are fortunate to be surrounded by some fantastic stud farms that do stand their stallions in this country. They are wonderfully supported by British breeders and international breeders. Without them, we wouldn’t be able to continue to provide this service.

“The Royal Meeting is where you want the best to meet the best and that’s what we have seen this afternoon.

“It’s a highly competitive international business. We are delighted to be standing exciting horses like Mayson and Twilight Son, and we have much to look forward to with Ulysses.”

“The horse deserves it, he confirmed what a good horse he was last year when he won the July Cup.

“Mayson’s progeny continue to improve with age and I’m really thrilled for the owner-breeders and, obviously, Roger Teal and his family. It is certainly his [Mayson’s] biggest winner. Standing at a fee of only £4,000, a Group 1 winner himself was bracketed as a soft ground specialist but we confirmed today that his progeny go both on the top of the ground and on soft ground.”

“I am delighted for Andrew Balding and the Berkshire Parts & Panels Limited. Part of our policy is to offer the colts for sale at public auction. He wasn’t an expensive yearling. We were a bit disappointed with the price but are thrilled that the breeding programme continues to shine. He was given a brilliant ride.

“The mare is a daughter of Islington, a champion mare herself, and we were pleased to have acquired her from the Ballymacoll dispersal. The mare was rated 105 and trained by Sir Michael.”