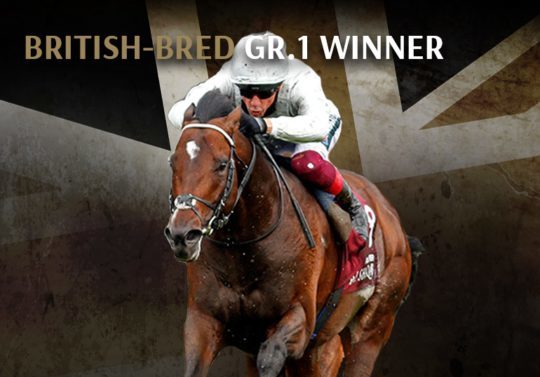 PALACE PIER (GB) led home a British-bred 1-2 in the Group 1 Lockinge Stakes at Newbury Racecourse on Saturday afternoon, upholding his credentials as the best miler in training in Europe with a commanding third top-level success for owner Sheikh Hamdan bin Mohammed Al Maktoum and trainers John and Thady Gosden.

The four-year-old son of KINGMAN (GB), whose fee at Juddmonte Farms’ Banstead Manor Stud remained at £150,000 in 2021, was bred by Highclere Stud & Floors Farming. The four-year-old is the third foal out of BEACH FROLIC (GB), who was sold by Highclere in foal to BLUE POINT to MV Magnier for 2.2 million guineas at last year’s Tattersalls December Mare Sale.

Palace Pier is himself at Tattersalls graduate, having been purchased by John Gosden on behalf of the owner for 600,000 guineas at the October Yearling Sale Book 1 in 2018. The colt’s latest victory on Saturday took his career earnings beyond £750,000.

“It’s so exciting when you breed a horse of this calibre and you come home, rush out to the paddock and go and look at the half-brother, it’s such a thrill.

“It’s a really good family and they do train on really well. At the time we did the mating, we didn’t know how important Kingman was going to be, so he’s spiced the family up a bit. We’ve got a magnificent yearling to follow, an Almanzor who seems to be doing very well, he’s a [Tattersalls] Book 1 horse.

“It’s great for everyone on the stud who do the day job. However good or bad a horse can be on the track, they still put the same input in, so it’s great for the whole team. It makes it all worthwhile.”

“I guess it is always bittersweet when you sell a mare, but most commercial breeders have to capitalise and keep reinvesting and diversifying in bloodlines, looking for the next dam of a Palace Pier. That’s part and parcel of it, that one has to do these things every now and again.

“I think I bought the granddam some 25 years ago and it’s held us in good stead, and we’ve still got some lovely relations including half-sisters, which is great.

“We can’t always go out and buy the best and send them to the best, we have to keep boxing a little bit clever to survive, but when you have a stream of nice horses that keep coming along and coming along and you do well, it makes you think you’re occasionally getting something right, and it’s important for the future of the stud.”

Reflecting on the breeding industry in Britain today, Warren commented:

“We’ve got a great product here, we’ve got phenomenal stallions at our disposal and I think British breeders need to be encouraged to get behind the product and make use of these fantastic stallions that are here and readily available to us.”

The sole mare in the field, LADY BOWTHORPE (GB), was the only rival able to keep tabs on the winner, claiming the runner-up spot in what was undoubtedly the best performance of her career for owner Emma Banks and trainer William Jarvis. A further five and a half lengths separated Lady Bowthorpe and TOP RANK in third.

Winner of the Group 2 Dahlia Stakes at Newmarket’s Rowley Mile Racecourse on her last start, Lady Bowthorpe is out of Paolo and Emma Agostinis’ sprinter MAGLIETTA FINA, who has spent her entire broodmare career at Luca & Sara Cumani’s Fittocks Stud just outside Newmarket.

While NATHANIEL has clearly served Maglietta Fina well, with Lady Bowthorpe counting as another high-class filly by the Newsells Park Stud sire, Sara Cumani recently confirmed to GBRI that the mare will be visiting Palace Pier’s sire Kingman next time around.