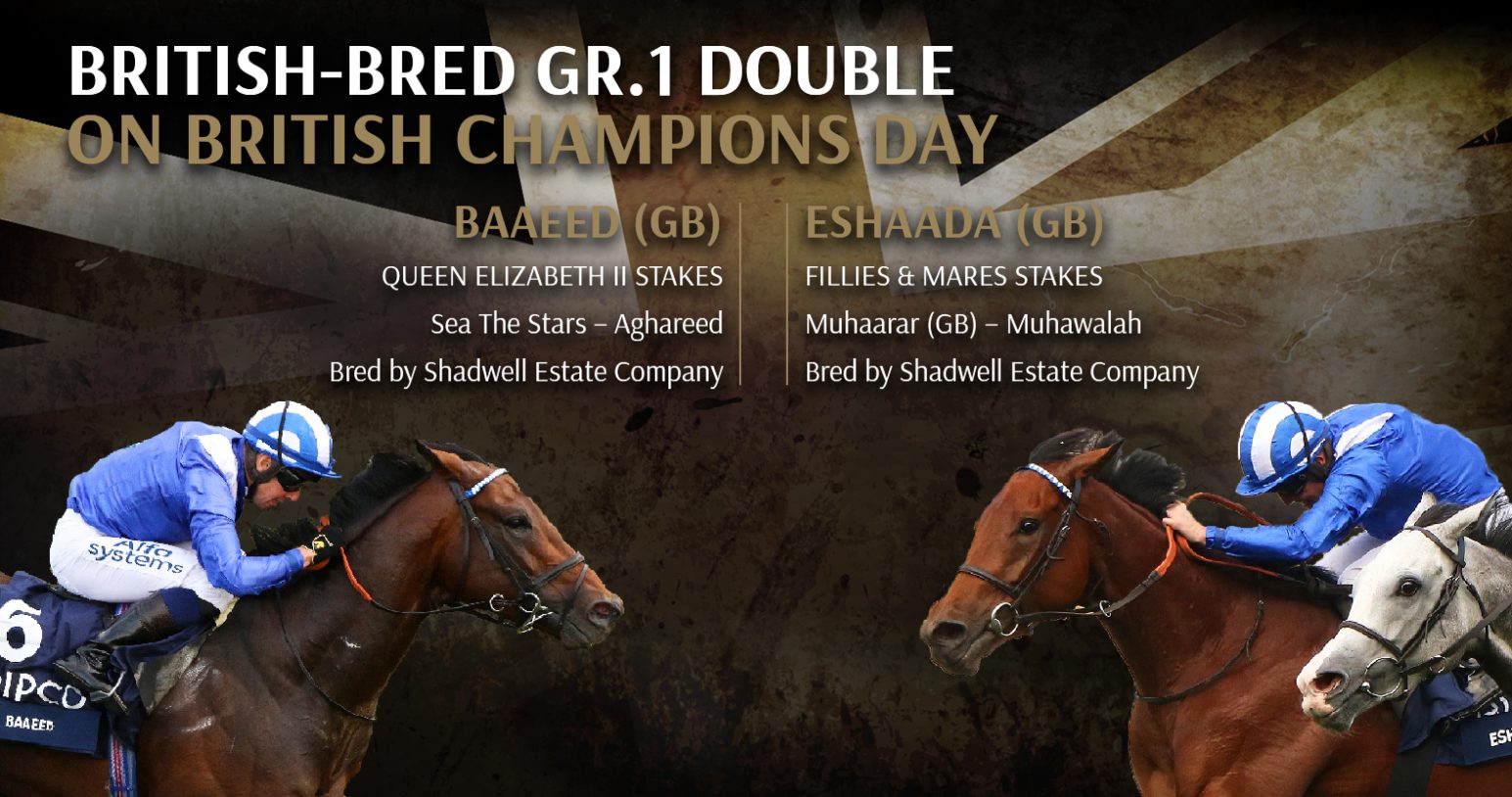 ESHAADA (GB) began a special British Champions Day for Sheikha Hissa and Shadwell Stud with a narrow success over Lanwades Stud’s ALBAFLORA in a thrilling tussle to the Group 1 British Champions’ Fillies and Mares Stakes.

A homebred for Sheikha Hissa’s operation, three-year-old Eshaada is by Shadwell’s European champion three-year-old sprinter MUHAARAR (GB) who made the breakthrough at Group 1 level as a stallion in style. The Group 1 British Champions Sprint Stakes winner is also the sire of the runner-up Albaflora.

Both fillies were a brilliant advertisement for their sire’s talent and tenacity as the pair battled bravely throughout the final furlong with Eshaada, trained by Roger Varian and ridden by Jim Crowley, fending off the persistent challenge of Rossa Ryan on Ralph Beckett’s four-year-old Albaflora. A photo finish was needed to determine the outcome with the younger filly called the winner by a short head.

The pair pulled three and a half lengths clear of the Oaks, Irish Oaks and Yorkshire Oaks winner SNOWFALL in third.

Eshaada won her only start at two and was successful in the Listed Newbury Fillies’ Trial on her seasonal reappearance this year. She was then second to subsequent Group 1 winner LOVING DREAM (GB) in the Group 2 Ribblesdale Stakes at Royal Ascot in June.

She is the third foal out of MUHAWALAH, a Shadwell homebred by NAYEF and a fullsister to the Group 1 Prix Jacques le Marois and Prix Jean Prat winner TAMAYUZ (GB), who stands at Shadwell’s Irish farm, Derrinstown Stud.

Muhawalah has a two-year-old full brother to Eshaada named MOONIS and a filly foal by KINGMAN (GB) on the ground.

Height Of Fashion also features in the pedigree of Eshaada as the dam of her broodmare sire Nayef and Tom Pennington reflected on the remarkable influence the mare has wielded over the operation when speaking to GBRI.

“It goes all the way back to the foundations that Sheikh Hamdan laid 35 years ago when he bought Height Of Fashion. To see her still having such an impact on pedigrees is phenomenal.

“After everything that has happened this year, for the team and the staff to have a day like this and for Height Of Fashion to be such a big influence on the results is amazing. It is incredibly sad that Sheikh Hamdan is not here to be a part of it. However, his legacy will live on and Sheikha Hissa was ecstatic following today’s results. These marquee days are what we all do it for and it is fabulous for everyone involved at Shadwell – it is such a huge team effort.

Eshaada’s sire Muhaarar comes from the Green Desert sire-line propagated by Shadwell and the timing of his first Group 1 winner was impeccable.

“To sire the first two in a Group 1 on a day when the European racing and breeding industry is watching is fantastic. Albaflora, already a Listed winner this year, has been a model of consistency and her day will come, but it was great to see the pair of them giving their all up the Ascot straight. They both showed a fabulous will to win.

“Muhaarar has had a very good year, especially with his fillies, and this has capped it off perfectly.” he added.