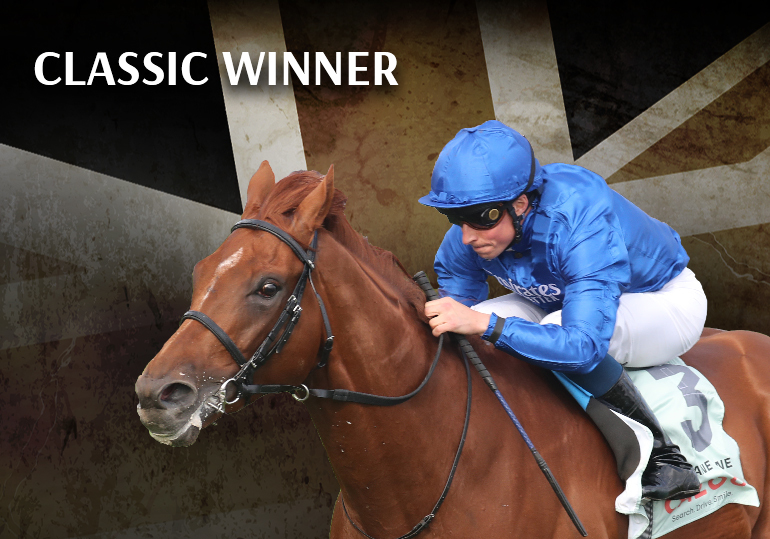 Breeder Philippa Cooper enjoyed a dream day at Doncaster's St Leger Festival on Saturday as HURRICANE LANE scored a second Classic success of his career in the Group 1 St Leger Stakes just thirty-five minutes after GLORIOUS JOURNEY (GB) landed an eighth career win in the Group 2 Park Stakes. Both horses were bred by Cooper's Normandie Stud, today a virtual entity with mares boarding in Britain and Ireland since late 2017.

Hurricane Lane travelled smoothly into the final British Classic of the season under William Buick, powering clear with a potent turn of foot when asked for an effort in the final two furlongs and scoring by a comprehensive margin of two and three-quarter lengths at the line.

Hurricane Lane is out of former Normandie Stud mare GALE FORCE (GB), who was purchased as a broodmare prospect by Stroud Coleman Bloodstock on behalf of Cooper for 270,000 guineas at the Tattersalls December Mare Sale in 2015 and was later sold on to Watership Down Stud at the same sale in 2019. Watership Down have since welcomed a filly by AUSTRALIA (GB) and are awaiting the mare’s next foal by their own stallion, TOO DARN HOT (GB). Hurricane Lane was bought by Godolphin for 200,000 guineas at Tattersalls October Yearling Sale Book 1 in 2019.

Six-year-old Glorious Journey hails from a prolific Normandie Stud family that has also been successfully represented in recent weeks at Saratoga by Listed John's Call Stakes winner SERVE THE KING (GB). Peter Brant's colt is out of FALLEN IN LOVE (GB), a half-sister to Glorious Journey's dam, FALLEN FOR YOU (GB). Glorious Journey is also a graduate of Tattersalls Book 1, having been purchased there in 2016 by John Ferguson on behalf of Godolphin for 2,600,000 guineas.

"It was actually quite emotional for me as the breeder. I just love the St Leger, it's just a wonderful race. I think he gave it a bit of pizzazz. I was very worried about him today, I think he's so much better at a mile and half, but he relaxes so well in the race. It’s just incredible how well he relaxes. I think his class got him through.

"Glorious Journey's family is probably one of my best families. I've still got grandma. Grandma [Fallen Star] has retired, I retire all my mares at twenty, and I've got a two-year-old Postponed filly that's still to run out of her. Fallen For You won the Coronation Stakes for us at Royal Ascot, and I've got her, and she had Listed winner and Group 3 placed Love Is You who ran but unfortunately got injured this year. I've got a Kingman yearling, who will probably go to John Gosden, and a Saxon Warrior filly foal, and the mare's in foal to Lope De Vega so she's very much active. And then the half-sister, Fallen In Love, whose mother to Serve The King, she's got an Expert Eye filly foal. Loving Things, whose also Fallen In Love's daughter, she's got a Sea The Stars yearling. There's lots happening in that family.

"The reason I don't have Gale Force, the mother of Hurricane Lane, is when I cut right back, I cut back to my three core families, which were Dolores' family, Foodbroker Fancy's family and Fallen Star's family.

"It's wonderful when you can sell horses to Godolphin and they do so well for them, because nobody wants to sell horses and for them to do badly for other people. To breed Classic winners is what we all aspire to, and doing it for others is something special, isn't it?"

Victory in the St Leger adds to what has been a magnificent year for Godolphin's three-year-old colts, with Hurricane Lane already having landed the Group 1 Irish Derby, the Group 1 Grand Prix de Paris and the Group 2 Dante Stakes, and stablemate ADAYAR having won the Group 1 Derby at Epsom Downs and the Group 1 King George VI & Queen Elizabeth Stakes.

The St Leger Festival has turned into another sparkling week for both colts' sire, Frankel. The Juddmonte Farms sensation became the fastest European-based stallion to reach 50 Northern hemisphere-bred Group winners earlier this week when INSPIRAL (GB) won the Group 2 May Hill Stakes on Thursday, while another Godolphin winner, NOBLE TRUTH, gave Frankel his first Stakes win as a broodmare sire when winning the Listed Flying Scotsman Stakes on Friday.