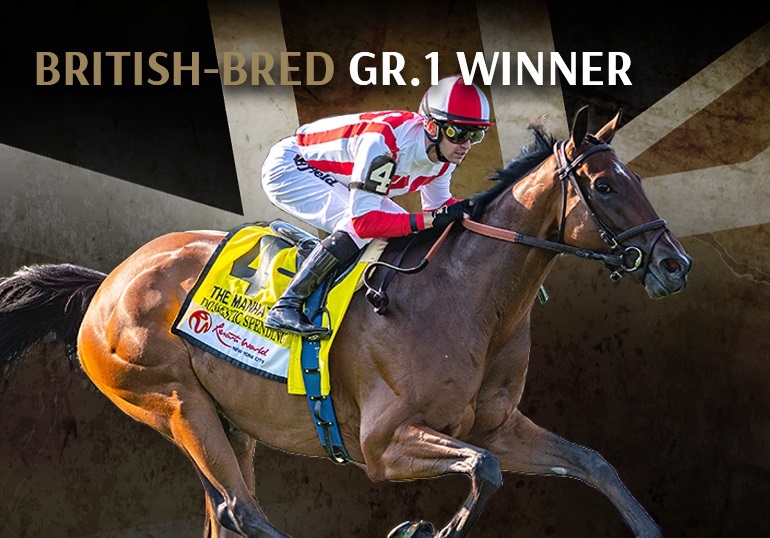 DOMESTIC SPENDING (GB) added a third Grade 1 to his resume with a convincing success in the Manhattan Stakes at Belmont Park on Saturday.

The four-year-old son of KINGMAN (GB) caught his closest rival TRIBHUVAN in the final furlong and was going away at the line for owners Klaravich Stables, trainer Chad Brown and jockey Flavien Prat.

Bred by Saeed Manana and Rabbah Bloodstock, Domestic Spending is the only foal out of URBAN CASTLE who won the Listed River Eden Stakes at Lingfield Park in Manana’s white and red silks. The dam is a half-sister to QUEEN’S BEST (GB) who won the Group 3 Windsor Hill Stakes and is the dam of Grade 1 Breeders’ Cup Filly and Mare Turf winner QUEEN’S TRUST (GB), a daughter of DANSILI (GB).

Second dam CLOUD CASTLE (GB) was also bred by Saeed Manana and won the Group 3 Nell Gwyn Stakes. It is a family that is synonymous with Manana who raced and bred Cloud Castle and her half-brothers, the four times Group 1 winner LUSO (GB), dual Group 1 Coronation Cup winner WARRSAN and the Group 2 winner and Group 1-placed NEEDLE GUN.

Domestic Spending was bought by Chad Brown and Mike Ryan for 300,000gns at Tattersalls October Yearling Sale Book One 2018 from the Highclere Stud consignment.

The gelding became Kingman's third Group/Grade 1 winner when victorious in the Hollywood Derby in December. The young Juddmonte Farms sensation has already had 10 stakes winners in 2021 including three at the top level.