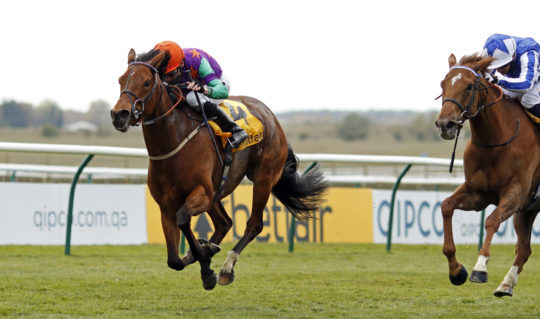 The relationship between Sara and Luca Cumani of Fittocks Stud and Paolo and Emma Agostini of Scuderia Archi Romani has been a long and successful one, the latest chapter of which was written at Newmarket on Sunday with the victory of LADY BOWTHORPE (GB) in the Group 2 Dahlia Stakes for William Jarvis and Emma Banks.

Lady Bowthorpe is out of the Agostinis’ homebred winning sprinter MAGLIETTA FINA and the 12-year-old daughter of VERGLAS has spent her entire broodmare career at the Cumanis’ farm outside Newmarket.

Maglietta Fina’s first foal is the Group 2 Greenlands Stakes and multiple Group 3 winning sprinter SPEAK IN COLOURS (GB), while Lady Bowthorpe, a five-year-old daughter of NATHANIEL, is her second foal.

Lady Bowthorpe was due to be sold by Fittocks Stud as a foal but was later sold through agent John Troy to James Toller at the Tattersalls October Yearling Sale Book 2 for 82,000gns. She made her Stakes breakthrough last summer with victory in the Group 3 Valiant Fillies’ Stakes at Ascot and is one of 14 Group winners by the Newsells Park sire, including GOD GIVEN (GB) who was Luca Cumani’s final Group 1 winner as a trainer.

The Cumanis and Agostinis enjoyed a fantastic couple of seasons on the racecourse with LE VIE DEI COLORI (GB) who won the Group 2 Challenge Stakes at Newmarket when trained by Luca Cumani for the stallion’s owner-breeders. A Group 1 winner in Italy, LE VIE DEI COLORI also finished third in the Group 1 Sussex Stakes and Group 1 Prix de la Foret under Cumani’s care.

A delighted Sara Cumani spoke to GBRI in the aftermath of Lady Bowthorpe’s Newmarket success.

“I am thrilled for Paolo and Emma [Agostini], who are such a lovely couple and have done incredibly well as breeders with just a small number of mares. They bred Le Vie Dei Colori and PER INCANTO who is a very successful sire at stud in New Zealand.

“They love their sprinters; Maglietta Fina was successful over five furlongs for them and has bred a multiple Group winning sprinter, who has been Group 1 placed, with her first foal. Maglietta Fina came to Fittocks Stud to begin her stud career in 2014 and she has been with us ever since. She is just a beautiful mare and has done so well for them. I am delighted that Lady Bowthorpe has been so successful for William Jarvis and Emma Banks.”

Cumani also had some exciting news for GBRI about Maglietta Fina’s latest covering.

“She has a four-year-old BRAZEN BEAU filly named PRETTY IN GREY (GB) in training with Marco Botti for Barbara Keller. She was third in a Listed race last year and looks like she could get more black type this year, which is fantastic for the mare to do that with her first three foals and all by stallions that some might not consider to be very fashionable.

“Maglietta Fina has a two-year-old MUHAARAR (GB) colt named MASTER OF COLOURS (GB) who Paolo and Emma have retained. She foaled a lovely filly by HOLY ROMAN EMPEROR and she is set to visit KINGMAN (GB) shortly. She has been given a stallion upgrade but I think that after what she has achieved she deserves it.”