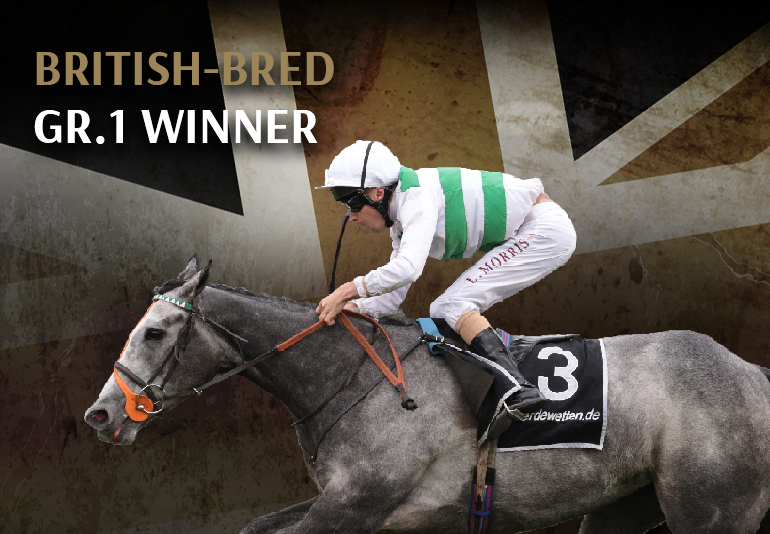 ALPINISTA (GB) crowned a glorious weekend for Lanwades Stud with her second successful trip to Germany for a Group 1, this time winning the Preis von Europa at Cologne.

It was the second Group 1 win of the weekend for Kirsten Rausing’s farm who also bred ZAAKI (GB), winner of the Underwood Stakes in Australia on Saturday morning, while Miss Rausing’s white and green silks, carried to victory in Germany by Alpinista, were sported by homebred SANDRINE (GB), who was third in the Group 1 Cheveley Park Stakes at Newmarket on Saturday afternoon.

The success was also the second at the highest level for Alpinista who won the Group 1 Grosser Preis von Berlin last month and who was second to LOVE in the Group 1 Yorkshire Oaks last season, on her only other foray into Group 1 company.

Alpinista is a four-year-old daughter of FRANKEL (GB) from Lanwades’ most illustrious ‘A’ family, that of Alriuccaba, and Alpinista hails from the branch established by her granddam ALBANOVA (GB) whose three German Group 1 triumphs for her owner-breeder included the Preis von Europa, a victory emulated on Sunday by her granddaughter.

Like her dam and granddam, Alpinista is trained by Sir Mark Prescott. She is the first foal of ALWILDA (GB) who also earned her winning blacktype in Cologne and she is a HERNANDO half-sister to the Group 3 winner ALGOMETER (GB) and the Listed winners ALL AT SEA (GB) and ALIGNAK (GB).

Second dam ALBANOVA is an ALZAO full sister to dual Group 1 Champions’ Stakes winner ALBORADA (GB) and they are out of Listed winner ALOUETTE (GB) who is a daughter of DARSHAAN (GB) and the matriarch ALRUCCABA (GB). Amongst Alruccaba’s other descendants are Group 1 winners ALLEGRETTO, AUSSIE RULES, CORONET (GB), DIAMONDSANDRUBIES, GALILEO CHROME, QUARTER MOON and YESTERDAY.

Speaking to GBRI previously Miss Rausing said: “I think she’s very typical of the family in that she is very brave. She sees off all comers and she takes battles, and battles with the colts. Her illustrious ancestress Albanova, her granddam, could do the same, and of course her own sister Alborada was particularly brave, only small, but very brave. Alpinista is longer - physically to look at she perhaps isn’t as beautiful as some of them, but I’m absolutely not in any way denigrating her!”

Alpinista’s success was the 87th for a Lanwades-bred so far this season and in time she will return to the farm near Newmarket to join around 20 mares from her family in the broodmare band.

Her dam has a two-year-old KENDARGENT filly named ALPENBLUME (GB), who is also in training with Sir Mark Prescott, and Alwilda is in foal to IFFRAAJ (GB).