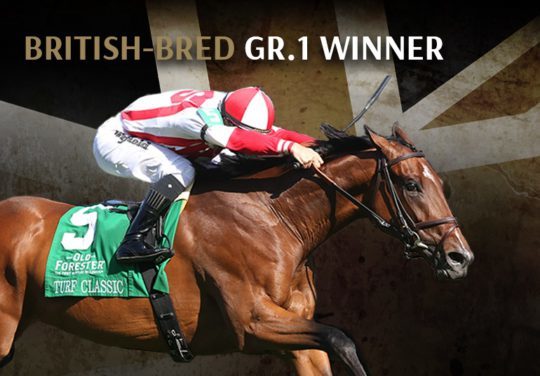 DOMESTIC SPENDING (GB) split the spoils with Colonel Liam in a spectacular finish to the Grade 1 Turf Classic Stakes at Churchill Downs on Saturday night.

The four-year-old son of KINGMAN (GB) charged late and fast down the outside to join his rival on the line and after protracted deliberations, the result was declared a dead-heat.

It was a second Grade 1 success for the Chad Brown-trained gelding who became his sire’s third Group/Grade 1 winner when victorious in the Grade 1 Hollywood Derby in December.

Bred by Saeed Manana and Rabbah Bloodstock, he is the only foal out of URBAN CASTLE who won the Listed River Eden Stakes at Lingfield in Manana’s famous white and red silks. She is a half-sister to QUEEN’S BEST (GB) who won the Group 3 Windsor Hill Stakes and is the dam of Grade 1 Breeders’ Cup Filly and Mare Turf winner QUEEN’S TRUST (GB), a daughter of DANSILI (GB).

Second dam CLOUD CASTLE (GB) was also bred by Saeed Manana and won the Group 3 Nell Gwyn Stakes. It is a family that is synonymous with Manana who raced and bred Cloud Castle and her half-brothers, the four times Group 1 winner LUSO (GB), dual Group 1 Coronation Cup winner WARRSAN and the Group 2 winner and Group 1-placed NEEDLE GUN.

Domestic Spending was bought by Chad Brown and Mike Ryan for 300,000gns at Tattersalls October Yearling Sale Book One 2018 from the Highclere Stud consignment.

Jake Warren spoke to GBRI on Sunday morning and was quick to pay tribute to Domestic Spending’s breeder and Rabbah Bloodstock, headed by Jono Mills, for the fantastic way they produced him.

“It was a pleasure to be involved with Domestic Spending and we are proud to be part of his story but enormous credit has to go to his breeder Saeed Manana and the team at Rabbbah, spearheaded by Jono Mills, who did such an excellent job in breeding and rearing him. We were privileged to just have to put the finishing touches to him when he came to be prepped for the sales at Highclere Stud.

“He comes from a lovely female family that has produced a lot of black type horses so when you put Kingman in amongst that, it’s no surprise that you get a horse like Domestic Spending.

“We are breeders too so we understand how difficult it is to produce good horses, they don’t come around that often, it takes a lot of time and investment and it is a family that Saeed Manana, along with the Rabbah team, has developed over the years and they deserve all the plaudits for breeding a horse as good as Domestic Spending.”

Warren recalled that Domestic Spending was a standout horse from the moment he arrived at Highclere Stud.

“He was an incredibly straight-forward horse to prep. You tend to know the ones who find things very easy and he was one of those horses. He had a great mental attitude and handled the sale very well. He had a huge amount of class and quality and Chad [Brown] and Mike [Ryan] loved him from the moment the saw him.

“He was one of two Kingman colts in our draft for that sale who have gone on to be Group/Grade 1 winners, the other being PALACE PIER (GB) and they were practically in the next door box to each other. We also consigned Group 1 Commonwealth Cup winner GOLDEN HORDE that year so it was an extraordinary sales season for our consignment.”