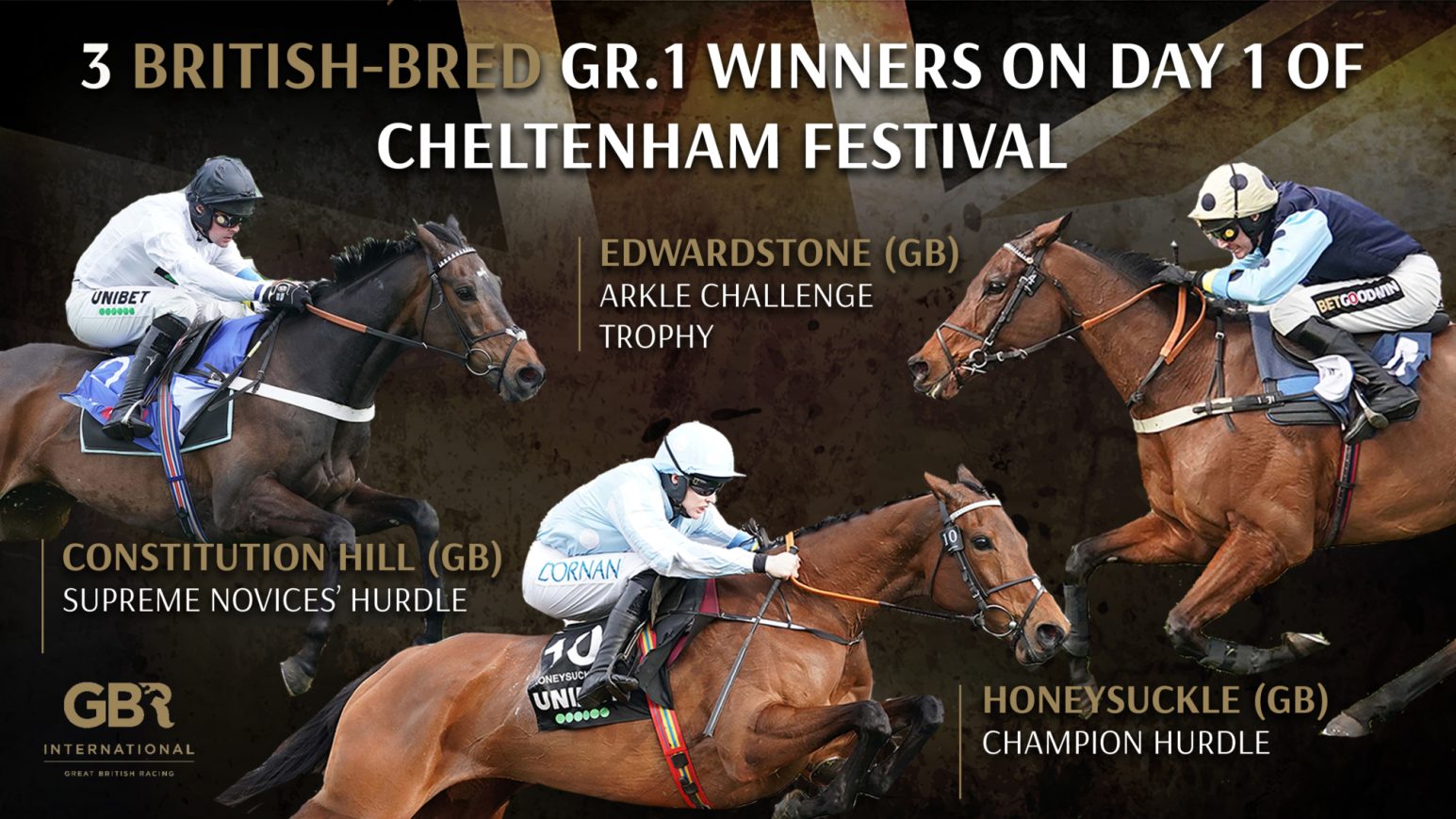 British breeders were responsible for no less than three Grade 1 winners on the opening day of the 2022 Cheltenham Festival in what was an impressive display of the British National Hunt breeding industry’s emphasis on quality over quantity.

CONSTITUTION HILL (GB) kicked off proceedings with a scintillating performance in the Gr.1 Supreme Novices’ Hurdle, putting twenty-two lengths between him and stablemate JONBON at the line and setting a new course record in the process.

The five-year-old son of BLUE BRESIL, who was standing his first season at Yorton Farm Stud at the time of conception, was bred by Sally Noott. He was a £120,000 purchase for owner Michael Buckley at the Goffs UK Spring Horses In Training/Point-to-Point Sale last year. Prior to that, he was sold as a foal for €16,500 by Throckmorton Court Stud on behalf of Worcestershire-based Noott.

Speaking with GBRI on Tuesday afternoon after the race, Noott reflected:

“What a horse. It’s everything you dream of really. I’m a very small breeder and horses like this don’t happen to me. I’ve only ever had one horse that’s taken me to Cheltenham that I’ve raced myself, but to have one that I’ve bred is what you dream of. It’s incredible.”

EDWARDSTONE (GB) then triumphed in the Gr.1 Arkle Challenge Trophy Novices’ Chase for Norfolk-based owner-breeders Robert Abrey and Ian Thurtle. A winner at the top table already this season, the result represented Edwardstone’s fifth successive victory over the larger obstacles.

Abrey and Thurtle bred the hardy 8-year-old from point-to-point winner NOTHINGTOLOOSE, who was purchased by Abrey at the Spring Horses-in-Training Sale at Doncaster in 2009 for £22,000. Edwardstone, her only foal to race to date, is a son of former multiple time Champion National Hunt sire KAYF TARA (GB), who is now retired from his stallion duties at Overbury Stud.

Speaking of how Edwardstone has exceeded all expectations, Abrey told ITV after the race: “This was never the dream, we were just trying to breed a nice horse out of a couple of point-to-point mares we had.”

For a second consecutive year, the feature race of the opening day, the Gr.1 Champion Hurdle Challenge Trophy, went the way of the extraordinary and still unbeaten HONEYSUCKLE (GB). The win represents the mare’s 15th straight victory, a 11th at Grade 1 level and a third Cheltenham Festival success.

Bred by Dr Geoffrey Guy at The Glanvilles Stud in Dorset, home of stud co-owners and managers Doug and Lucy Procter, Honeysuckle is a daughter of the late Yorton Farm sire SULAMANI and is one of three winners out of the late LANDO mare FIRST ROYAL, who was twice Listed-placed over hurdles in her native Germany.

A flagbearer for British National Hunt breeding for the last three seasons, she has now earned over £1,180,000 for owner Kenneth Alexander.

Reflecting on the flurry of success for British breeders on the first day of the Cheltenham Festival, Claire Sheppard, CEO of the Thoroughbred Breeders’ Association, commented:

“It is fantastic to see three British-bred Grade 1 winners on the first day of the Cheltenham Festival. From comparatively small foal crops, British-bred jump horses demonstrate they can not only compete but succeed at the highest levels of the sport.

“The TBA’s NH Elite Mares’ Scheme that offers subsidised stallion fees for qualifying mares is encouraging more top-quality mares to stay in Britain and incentivising more British studs to stand jump stallions. The strategy for the future of jump breeding in Britain continues to be focussed on quality over quantity.

“Our congratulations to the breeders of Constitution Hill, Edwardstone and Honeysuckle for such outstanding achievements on the racecourse.”