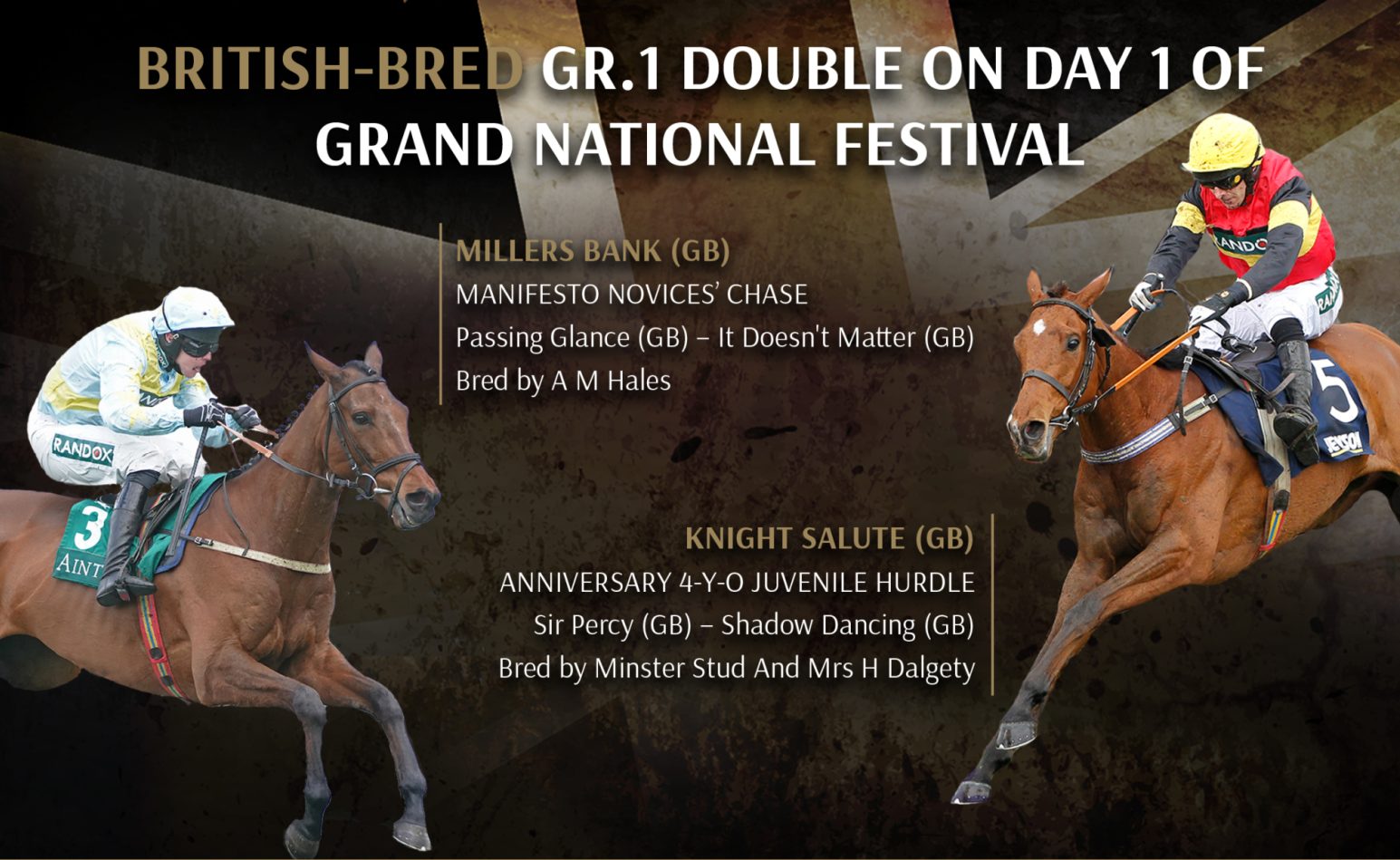 The Grand National Festival started in much the same way for the British breeding industry on Thursday as the Cheltenham Festival did, with horses carrying the (GB) suffix claiming Grade 1 honours on the opening day.

A first top-level victory for trainer Alex Hales in the first race, the Gr.1 Manifesto Novices’ Chase, was made all the more special for the fact that Hales bred the winner, MILLERS BANK (GB), himself.

Ridden patiently throughout by Kielan Woods, Millers Bank was foot-perfect over Aintree’s Mildmay course fences. Closing in on the leading pair up the home straight, the eight-year-old skipped clear approaching the final fence and swiftly put 10 lengths between him and his closest rival, WAR LORD.

Speaking with Great British Racing International on Thursday afternoon, Hales reflected on his limited but successful foray into breeding:

“Many moons ago, I had an owner who wanted a foal, so we went to the old Doncaster sales and bought the mare [IT DOESN’T MATTER (GB)], then a Karinga Bay filly foal, and she came back to us. We reared her and she came into training. She worked really nicely and I thought she’d be okay as a racehorse, then she injured herself behind. In a fit of stubbornness, I suppose, because I’d spent so much money and time on her, we decided to breed from her, and here we are, god knows how many years later.

“We didn’t set out to breed. She’s the first mare that Sally and I had, and it’s a fairytale because not only did she breed Millers Bank but she’s bred Bourbon Beauty who won the Grade 2 at Newbury last year, and that’s from her only two foals to hit the track so far, so it’s been phenomenal.

“At home we’ve got a three-year-old half to Millers Bank by Clovis Du Berlais, and then a yearling full-sister by Passing Glance. She [It Doesn’t Matter] was covered by Jack Hobbs the other day. We’ve got the bug and we’ve got two- and a-bit mares now.

“I believe the team have organised the pub and we’ll just enjoy it with everyone back at home tonight.”

The Manifesto Novices’ Chase result - and indeed the day as a whole - was also a significant one for Batsford Stud, whose resident stallion PASSING GLANCE (GB) now has two Grade 1 winning chasers to his name. Batsford Stud were given further cause to cheer when another of the sire’s progeny, LATENIGHTPASS (GB), won the Foxhunters’ Open Hunters’ Chase.

“He has to be the most underrated stallion, really,” Hales continued. “Bless him, he’s never covered that many decent mares, but he’s bred Dashel Drasher and he consistently seems to come up with the goods.”

Hales was not the only British trainer celebrating a maiden Grade 1 win on the opening day of Aintree’s showpiece meeting.

Milton Harris, who has enjoyed a landmark season, also landed a career defining success as KNIGHT SALUTE (GB) was eventually declared the outright winner in the Gr.1 Anniversary 4-y-o Juvenile Hurdle, after a stewards enquiry saw the initial dead heat verdict amended in his favour.

Knight Salute, who was bred by Willie Carson’s Minster Stud And Mrs H Dalgety, has been a revelation over hurdles under Harris’ tutelage. A string of five victories since September, a trio of which were at Grade 2 level, preceded a sub-par performance in the Gr.1 Triumph Hurdle at the Cheltenham Festival, but the son of Lanwades Stud sire SIR PERCY (GB) rounded out his impressive season on an all-time high on Thursday.

The result was also significant for the way in which it demonstrated that there is always value to be found for buyers with smaller budgets at Britain’s horses-in-training sales. While the eventual runner-up PIED PIPER (GB), bred by Her Majesty The Queen, was purchased for 225,000 guineas at the Tattersalls Autumn Horses-In-Training Sale last year, Knight Salute was picked up at the July equivalent for just 14,000 guineas by Mark Adams of the Four Candles Partnership.

“It is easy to forget that the British National Hunt breeding industry is, by some way, an underdog versus its Irish and French counterparts in terms of sheer numbers, producing around 25% of the foal crops in those countries.

“British-bred jumpers achieving more than we might expect based on population size has been a recurrent theme throughout this season, particularly on the big occasions. We saw it on the opening day of the Cheltenham Festival, and we’ve seen it again today at Aintree.

“Our congratulations go to the successful breeders, trainers and owners.”