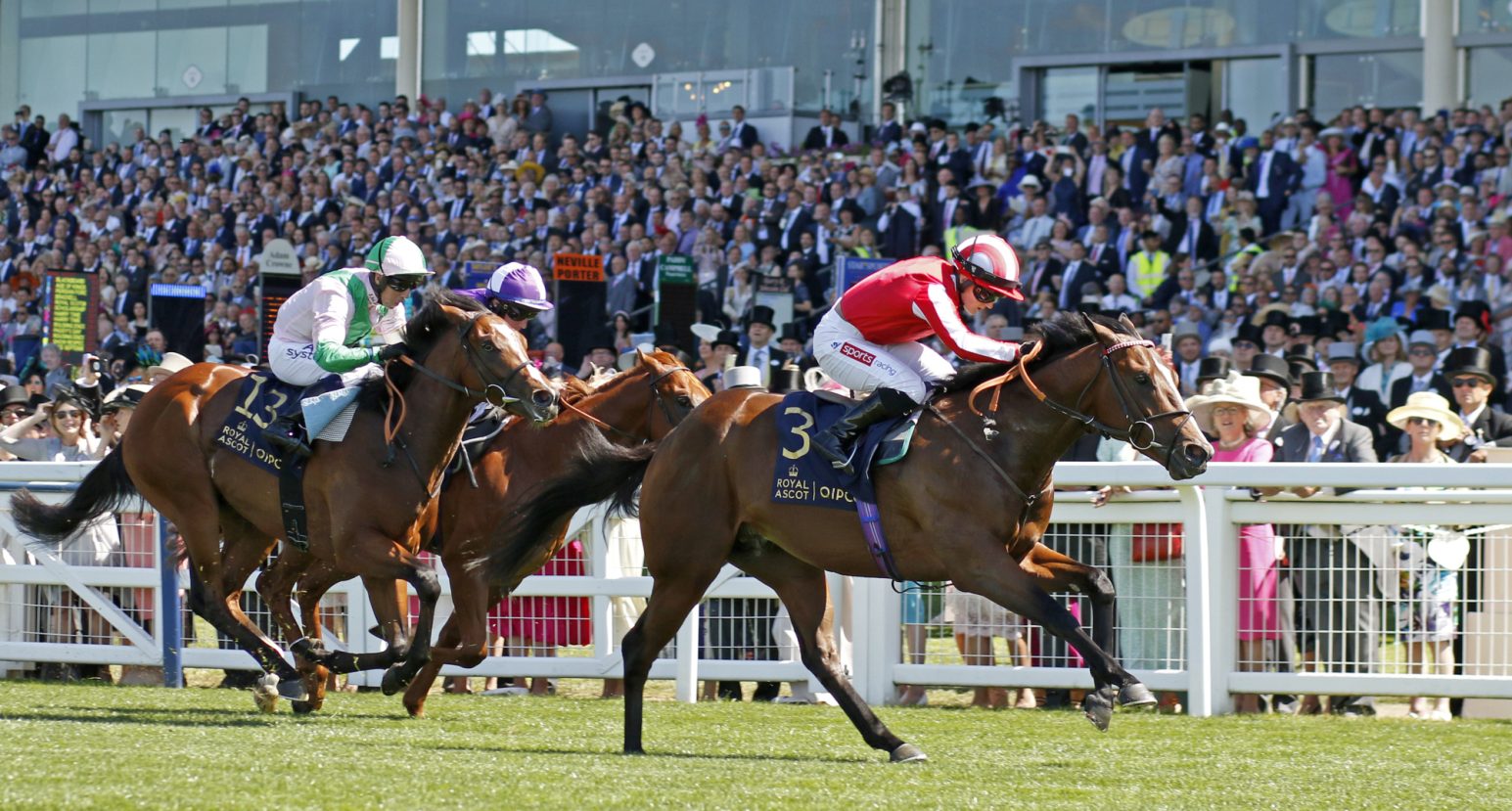 Yorkshire breeder Deborah O’Brien landed her first Royal Ascot success when BRADSELL (GB), who cost just 12,000 guineas as a yearling and £47,000 as a two-year-old, proved much too strong for a top-class line-up in the most prestigious juvenile race of the Royal Ascot meeting, the £150,000 Group 2 Coventry Stakes, at Ascot Racecourse on Tuesday.

Bred at Bearstone Stud in Shropshire on behalf of O’Brien, Bradsell is from the first crop by TASLEET (GB), who stands at Nunnery Stud in Norfolk for a covering fee of just £5,000.

Nunnery is part of the late Sheikh Hamdan Al Maktoum’s Shadwell breeding operation which enjoyed an incredible start to Royal Ascot – it’s home-bred world champion, BAAEED (GB), maintained his unbeaten record with an easy victory in the opening race, the £600,000 Group 1 Queen Anne Stakes, and was followed 40 minutes later by this landmark success for Tasleet.

A third career victory at the royal fixture for jockey Hollie Doyle and a second for Lambourn-based trainer Archie Watson, Bradsell was squeezed out leaving the stalls and then looked in danger of being marooned in the centre of the course while the action surrounded the pace-setting ROUSING ENCORE much closer to the stands rail. But he overcame these setbacks to move into the lead with a third of the contest’s six furlongs still to travel and passed the post a length and a half in front of PERSIAN FORCE.

Asked about her mount’s price as a yearling in a TV interview as Bradsell walked back to the winner’s enclosure, Doyle said: “No matter what you pay, if you get a good one, they can bring you here.”

Bradsell has already changed hands on three occasions despite having raced only twice. His yearling purchase, at the Tattersalls Somerville Sale in September 2021, was by Highflyer Bloodstock on behalf of the Group 1-winning trainer, Harry Dunlop.

He was then prepared for the breeze-up sales by former jump jockey Mark Grant and was sold at Goffs UK’s breeze up in Doncaster for £47,000 to Blandford Bloodstock.

Finally, following a stunning debut success when he trounced his York rivals by fully nine lengths, in a deal brokered by Oliver St Lawrence he was sold again to Victorious Racing, the ownership banner used by Shaikh Nasser bin Hamad Al Khalifa of Bahrain.

Deborah O’Brien, who lives in the same North Yorkshire village, Goldsborough, which in the late seventeenth century was home to one of thoroughbred breeding’s three foundation stallions, BYERELEY TURK, first got involved in racing when she part-owned Bradsell’s fourth dam, CHAMPENOISE (GB), in the early 1990s, and later went on to buy her outright.

She chose Bearstone’s stallion, TRAGIC ROLE, for her broodmare’s first covering and has ever since boarded all her mares at the Holdcroft family’s stud. She now has a seven-strong broodmare band.

“Enormous credit should go to the staff at Bearstone who do all the hard work,” an overjoyed O’Brien said between sips of champagne shared at home with her husband, Michael. “I trust them completely and I think of Bearstone as the equine equivalent of the Ritz!

“I have bred two different Listed winners in the past, including Bradsell’s dam, RUSSIAN PUNCH (GB), and the whole family is just hardy, they race and race and try and try, but to get a winner at this kind of level is fantastic.

“I fell in love with Champenoise and, although she never won anything other than a seller at Yarmouth, she was the only horse in Michael Bell’s yard never to be visited by the vet and we always thought that she was a good deal better than she showed.

“As for Russian Punch, she is absolutely sweet and has the perfect temperament for racing. On my regular visits to see her she always comes straight over to say hello.

“Sadly, she lost her latest foal, a filly by TWILIGHT SON (GB), so I decided to give her a break for a season. But we have a gorgeous yearling colt by ULYSSES, who will be sold at Goffs UK Premier Sale this autumn.

“We have also kept her three-year-old filly by MAYSON (GB), who is called MAY PUNCH (GB) and is trained by Tim Easterby. She won at Ripon last month and we are going up to Scotland tomorrow to see her run at Hamilton.

“I take a lot of time working out the matings for my mares, I don’t believe that you need to spend an awful lot of money and I’ve never used a stallion from outside Britain as you don’t need to.

“I was attracted to Tasleet because he was tough and sound over several seasons and was the right price for an, as yet, unproven mare. He’s bred in not dissimilar lines to Baaeed.”