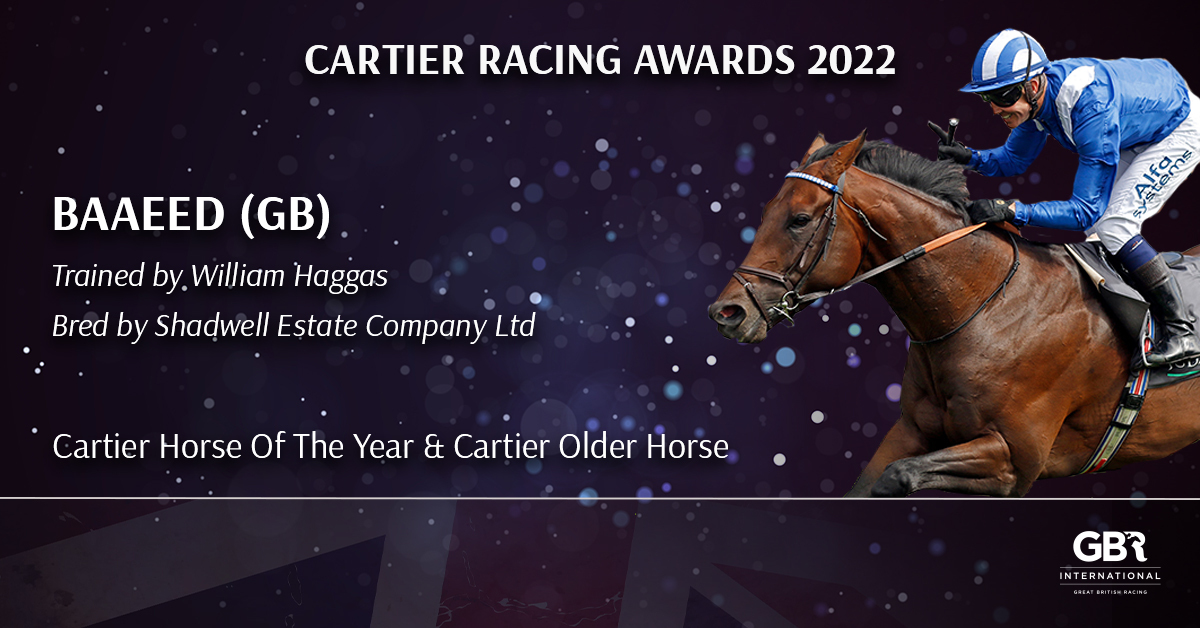 BAAEED (GB) was announced as the Cartier Horse of the Year at the 32nd Cartier Racing Awards during a glittering ceremony at the Dorchester Hotel in London yesterday evening. Trained by William Haggas, Baaeed faced stiff opposition to claim the Cartier Horse of the Year accolade, with Group 1 Qatar Prix de l'Arc de Triomphe winner ALPINISTA (GB) among the other nominees.

He is the first horse owned by Shadwell to receive the prestigious award following an outstanding season that yielded Group 1 wins in the Al Shaqab Lockinge Stakes, Queen Anne Stakes, Qatar Sussex Stakes and Juddmonte International.

There was further cause to celebrate for the British breeding industry as LEZOO (GB) received the Cartier Two-Year-Old Filly prize following an impressive campaign that produced four wins from five starts, including a decisive success in the Group 1 Cheveley Park Stakes. Trained by Ralph Beckett for international owners Marc Chan and Andrew Rosen, Lezoo saw off competition from fellow Group 1 winners COMMISSIONING (GB), TAHIYRA and THE PLATINUM QUEEN.

HIGHFIELD PRINCESS has proved one of the stories of the season and John Fairley’s homebred was named the Cartier Sprinter following a trio of sensational Group 1 victories for John Quinn in the Prix Maurice de Gheest, Nunthorpe Stakes and Flying Five Stakes.

The recipient of the Cartier/The Daily Telegraph Award of Merit in 2022 was Kirsten Rausing. Held in the highest regard throughout the industry, Rausing has not only excelled as an owner and a breeder but served as an integral figure in the sport’s governance and administration. Through the Alborada Trust, she has also provided vital funding for a host of causes in racing and wider society.

Renowned for adopting a hands-on approach in every aspect of her work, 2022 represented a banner year for Rausing as she saw her colours carried to victory in the Prix de l’Arc de Triomphe by Alpinista and enjoyed a first UK Classic success as a breeder with ELDAR ELDAROV (GB).

Laurent Feniou, Managing Director of Cartier UK, commented: “We have been fortunate to witness another exceptional year of European horseracing and I am delighted to celebrate an outstanding group of horses at the 32nd Cartier Racing Awards. Baaeed lit up the season with four brilliant victories and he is a worthy recipient of the Cartier Horse of the Year award. We are also thrilled to honour Kirsten Rausing, who has given so much to the industry, with the Cartier/The Daily Telegraph Award of Merit. It is a privilege for Cartier to be able to recognise these champions of the sport and my deepest congratulations go out to all of this year’s winners. I would like to extend special thanks to Racing Post, The Daily Telegraph and Sky Sports Racing for their continued support of the awards.”