Galileo Gold’s emphatic victory in the 208th running of the QIPCO 2,000 Guineas was not only a significant win for his connections, but also for the British breeding industry, which can now celebrate Paco Boy as a young British sire who has already produced a Classic winner.

Paco Boy, who currently stands at Highclere Stud in Berkshire for a fee of just £6,500, represents tremendous value as a second season sire. Jake Warren of Highclere Stud comments:

“When any stallion commanding a fee of under £10,000 can produce you a Classic winner, it’s fantastic. It shows that anything is possible if you have the right mating. Paco Boy has been heavily supported by British breeders since he retired to stud and he’s proven to be an incredibly successful stallion with the mares that he’s covered. He’s a very versatile stallion who can really improve your mare. That’s what we’re really excited about being a part of.”

Frankie Dettori points to the sky as Galileo Gold crosses the line a length and a half clear of his rivals. (Photos: Racingfotos.com)

Indeed, Galileo Gold’s 2,000 Guineas win will act as a considerable boost to Paco Boy’s credentials as a sire of top class performers, although he is already able to boast 23 2yo winners and 7 stakes winners. Brian O’Rourke, who bred the Classic winning colt, explains that the stallion’s potential was arguably unfairly dismissed before Galileo Gold recorded the win last Saturday:

“I think people are particularly quick to dismiss stallions early on in their careers, for one reason or another. People were quick to dismiss Paco Boy. We always had faith in the horse. It goes to show that you can take a chance on a young sire to try and get your mare wins on the board. I would not be afraid to use a young, unproven sire.”

The story behind how O’Rourke, who now runs Brian O’Rourke Bloodstock in Lambourn, ended up breeding the Paco Boy colt is a tale worth telling. O’Rourke explains:

“The mare [Galicuix] had been through the sales ring and failed to reach her reserve, so I bought her privately. At the time I was managing Highclere Stud for John and Carolyn Warren, where I had worked for nine years. As a result of my time at Highclere I was given a nomination each year to Paco Boy and I thought that he could add some of his brilliant speed and toughness to a stamina-laden pedigree on the mare’s side, and so I sent the mare to be covered by him. I knew how tough and durable Paco Boy was and obviously had seen his first few foals and was very happy from what I had seen. It was very kind of John and Carolyn to give me the free nomination. As far as Galileo Gold is concerned, I am so thrilled for the Al Shaqab team that they have him now. They put a lot into the game and it’s a fantastic result for Harry and the whole team.”

“British breeders are at the top of the tree when it comes to international breeding. Everyone wants to buy British bloodstock, whether it’s from Australia, America, China, wherever. To have another stallion like Paco Boy who is only in the fledgling part of his stallion career proving that Classic winners can be bred in this country is a massive boost for the British breeding industry.”

The 2015-2016 National Hunt season in Britain provided clear-cut proof of the continued excellence of British-bred thoroughbreds, with Rule The World, Thistlecrack and Cue Card claiming the top 3 spots in the list of the season’s highest earners.

The 2016 Crabbie’s Grand National champion, Rule The World, scooped £561,300 for the win – a record sum of prize money for the Grade 3 contest – making him the biggest earner of British prize money this season. Bred by Mrs P G Wilkins and Mr R J McAlpine and bought by Gigginstown Stud, Rule The World is this season’s flag bearer for successful British bred National Hunt horses, but is by no means alone at the top of the table.

Thistlecrack, winner of the 2016 Ryanair World Hurdle, netted a total of £372,003 over the season, making him the second highest earning National Hunt horse in British racing. Bred by Robin and Scarlett Knipe of Cobhall Court Stud, Thistlecrack has no doubt got connections hoping that the full sister, sold at Cheltenham earlier this year, will be as much of a force to be reckoned with on a racecourse as Colin Tizzard’s star.

The lineup of the three highest earners over the 2015-16 National Hunt season is completed by the ever popular Cue Card. The King’s Theatre gelding out of Wicked Crack has proved to be the biggest and brightest feather in Welsh breeder Roland Crellin’s cap.

Crellin comments, “Cue Card is undoubtedly the best I’ve bred. He has opened a lot of doors, I no longer have to go looking around for buyers, he has been a tremendous help. Looking forward, we will be sending a half-brother to Cue Card by Beneficial to the sales this year and a half-brother by Gold Well next year. We also have a full sister to Cue Card at home.”

“The 2015-2016 National Hunt season has been extremely successful for British bred horses. It is especially pleasing to see the top earning positions filled by Cue Card, Rule The World and Thistlecrack. This achievement is made all the more remarkable by the fact that British bred runners are vastly out-numbered by French and Irish bred National Hunt horses. Within the British National Hunt breeding industry there has been an emphasis on quality over quantity in recent years, which has been supported by the TBA’s initiatives including the Elite Mares Scheme, sponsorship of the NH mares’ race programme, NH Foal Show, NH Stallion Parade and NH Mare Owners’ Prize Scheme (NH MOPS).

This year gives cause to celebrate the great success on the racecourse. We look forward to the 2016-17 season encouraged by the results of the TBA’s schemes and the enduring support and commitment of British National Hunt breeders.”

“In what has been a vintage jumps season, it’s great to see British-bred horses, and British breeders, at the head of the prizemoney tables. Throughout the winter we have been privileged to see the likes of Thistlecrack and Cue Card perform at the highest level consistently, and they are a credit to the training skills of Colin Tizzard. Let’s hope that they can both finish the season on a high and add to their earnings at Punchestown.”

GBRI has been set up to facilitate and grow international investment into the British racing and breeding industries. GBRI provides a bespoke service for those seeking to invest in the highest levels of thoroughbred racing in Britain, as well as marketing British racing to a wider international audience. As a world leader in the sport, British racing is a prime opportunity for investment at all levels.

Great British Racing International (GBRI) and the Thoroughbred Breeders Association (TBA) have today announced a joint partnership to promote the success of British bred horses, both internationally and domestically. The campaign will highlight successes via social media and email campaigns, digital advertising and feature placement in relevant publications.

“GBRI’s primary remit is to generate inward investment for the British racing industry and so it follows that we should be a part of promoting British success to a global audience in order to showcase the quality of British bloodstock.

We will be ensuring that British bred successes at the highest level are well covered within international publications, both printed and online, and promoted to our ever-expanding database of global contacts. It’s important that we make the most of horses like the British-bred Golden Horn on the flat and Thistlecrack over timber, who demonstrate why Britain remains the centre of the thoroughbred racing and breeding world.

The whole team at GBRI look forward to working with the TBA, and its members, to celebrate British successes in 2016 and beyond.”

“A number of our members have asked us to support the promotion of British bred runners and we are delighted to announce our partnership with GBRI to promote British bloodstock on both a national and international level. British bred Thoroughbreds are amongst the highest quality in the world and this opportunity will allow us to celebrate British breeders’ successes with a much wider audience. In the short term the campaign will raise awareness of the UK’s most successful horses, with a view to generating further interest in buying British Thoroughbreds and enable us to co-host inward buyers’ visits with GBRI and sales houses.”

GBRI has been set up to facilitate and grow international investment into the British racing and breeding industries. GBRI provides a bespoke service for those seeking to invest in the highest levels of thoroughbred racing in Britain, as well as marketing British racing to a wider international audience. As a world leader in the sport, British racing is a prime opportunity for investment at all levels.

RT @GB_Bonus: Day 2 of @GoffsUK Spring Store Sale and there is still plenty of opportunity to purchase a GBB filly. 🐎Lot 230 - Kayf Tara…
about 1 hour ago 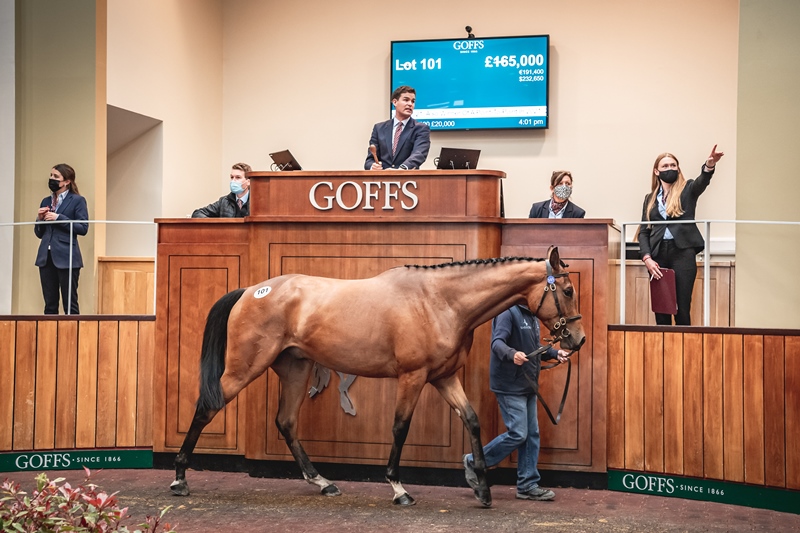 RT @TheJockeyClub: Our thoughts are with Joe Mercer's family and friends at this sad time. His association with one of the all-time greats…
about 17 hours ago